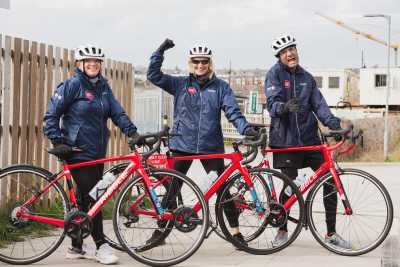 Wednesday 11th March: Jo Whiley, Rev Kate Bottley and Richie Anderson have this evening completed the first of three consecutive triathlons; on day one of their Dare 2 Tri challenge for Sport Relief, in Cardiff.

A bright but windy start greeted the intrepid Radio 2 team as they took to the water at the Barry Community Water Sports Centre this morning, in South Wales. The blustery weather and freezing cold waters – known to house jellyfish and eels – did little to dampen the spirits of the trio, and they were all able to complete the first leg of their challenge unscathed.

Swapping their wetsuits for bikes, the team moved onto the second leg of the day, a gruelling 30km cycle through the South Wales countryside, via the picturesque towns and villages of Moulton, Twyn-Yr-Odyn, Dinas Powys and Penarth, before they arrived at the Cardiff Cycling Club early this afternoon. Despite the beautiful surroundings, steep hills, coupled with howling winds, made for an extremely difficult ride that would test their resolve. Fortunately for the team, they were joined on their cycle by legendary Welsh actor, Michael Sheen.

Jo Whiley said: “Every time you do a triathlon it’s harder than you imagine it’s ever going to be. You lull yourself into a false sense of security, it’s been hard and all day long I’ve been thinking I’ve got to go and do another tomorrow but the sense of friendship between the group, Kate, Richie and myself, it’s been wonderful and lovely, we are looking after each other out there, urging each other on – it’s everything I dreamt it would be.”

Richie Anderson said: “I didn’t like any of the water, I’m not going to lie. When I got out my feet just went from underneath me. The earth was spinning and before I knew it, I was back in the changing rooms, wrapped up with a cup of tea in my hand, shivering. I must have looked like an old boot being dragged out of the water. It feels quite lonely in there. Even though we’re all in there, you feel quite vulnerable and on your own.”

Rev. Kate Bottley said: “Sport is not actually about being the fittest or the fastest or the one who goes furthest, it’s about the way it makes you feel and the joy and empowerment it brings. We did a great job and we can take that and use the positive energy to get us over those hills.”

After finishing the cycling leg, Michael Sheen said: “It was the worst thing I’ve ever done in my life! How hard that was, how unfit I am…in what was essentially a series of low points, there were a few that stood out; one was getting to the end of a particularly long, hard hill, thinking we must be nearly there – only to find it was halfway. Another was an hour and a half in, given that we had left Barry to get to Cardiff, an hour and a half in we passed the ‘welcome to Barry’ sign. It was then that I questioned my life choices. For a man in peak physical condition, I found that particularly difficult!

“All joking aside, Sport Relief supports incredible work here at home in Wales, using the power of sport to bring people together. It’s a simple idea which can have huge impact - just like sport itself.”

The final stretch of day one of the challenge was a 10km run into the Welsh capital this evening and saw the radio stars joined by a selection of runners, including BBC Radio 2 colleague and ex-Wales rugby player, Ian Gough and CEO of Welsh Triathlon, Beverley Lewis. The team enjoyed a short-lived but collective sigh of relief as they crossed the finish line, with preparations already underway for their journey to Glasgow for the next triathlon.

Tonight, live from Cardiff, and with the help of Michael Sheen, Jo Whiley will present her daily Radio 2 show, before the team depart for Glasgow, for day two of the challenge.

BBC Radio 2 listeners are able to follow the presenters’ progress across the challenge, with regular check-ins on the station’s programmes, supported by hosts including Zoe Ball, Ken Bruce, Jeremy Vine, Steve Wright and Sara Cox. Jo Whiley will face the added demand of hosting her regular Radio 2 show.

To donate and support the team, go to sportrelief.com/dare.