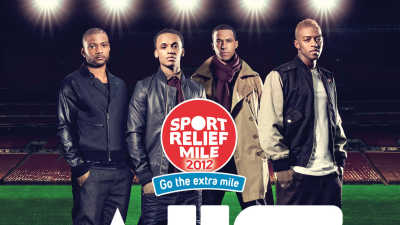 Having taken the UK music scene by an absolute storm in recent years, JLS are putting their success to incredible use having written and recorded this year’s official Sport Relief single, Proud.

It comes after all four band members, Aston, Oritsé, JB  and Marvin, took time out of their busy schedule to see first-hand how cash raised through Sport Relief can change lives in Uganda.  They visited an inspiring project called Retrak which helps young boys who face terrible hardship living on the streets of Kampala.  With Sport Relief cash, the project is able to help these boys get an education, escape the dangers of street life and rebuild their lives once and for all.

The entire band was deeply moved by what they saw and are proud to support this year’s fundraising campaign knowing what a difference the cash raised will make to many people’s lives.

With their musical-Midas touch, the lads’ efforts will inevitably result in a hit having already secured five UK number one singles, sold over five million records in the UK, and notched up two MOBO Awards plus two BRIT Awards.  In fact it’s a good job there’s four of them to house the increasing number of gongs they keep winning for their fantastic musical talent.

JLS will also be performing a special one-off matinee concert for Sport Relief at The O2 on Saturday 24th March, during The Sport Relief Weekend.  The boys will be joined by special guests and it looks set to be huge. Tickets go on sale at 09.30 on Saturday 20th January..

Their Sport Relief single will be available to download on 18th March and in stores from 19th March – the countdown has begun.