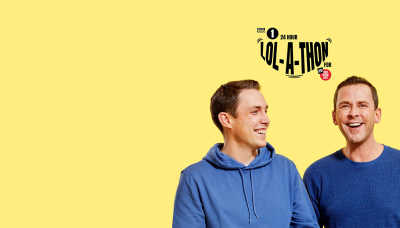 Radio 1's Lolathon Is Back

Help us fund life-changing projects in the UK and around the world.

The LOL-a-thon for Red Nose Day is back on Radio 1. This year it’ll be funnier than ever with 24 hours of entertainment, comedy gold and more special guests than ever before to help put a smile back on the nation's face through the power of the LOL.

Join Scott Mills, Chris Stark and the Radio 1 family live for the nation’s favourite 24-hour comedy challenge from 9am on Thursday 11th March and prepare for some seriously funny listening.

Help turn those LOL’s into lasting change by tuning in and helping to raise loads of money to support people living incredibly tough lives in the UK and around the world. Every donation really does make such a difference.

Some of the highlights...

Radio 1’s 24-hour LOL-a-thon for Red Nose Day with Scott, Chris and the Radio 1 family will kick off at 9am on Thursday 11 March and will continue until 9am the following day (or until Scott falls asleep at the controls).

The 24-hour comedy challenge is back, recharged, and ready to get the nation crying with laughter again.

The marathon show will feature some of the nation’s biggest music and entertainment stars, including Little Mix, who will be meeting Superfan Steve,(opens in new window) Anne-Marie and KSI, who will be reading their old school reports to the nation, and Joe Lycett, who will be scrolling back through some of his very first social media posts, with embarrassing results.

This is a hilarious 24-hours you won’t want to miss, with so much more to be revealed, so watch this space.

How do your Lols make a difference?

In a year when everything changed, people already living the toughest lives have been hit the hardest. Including those facing homelessness, hunger, domestic abuse and mental health stigma. Many more, who were in a good place at the start of 2020, have been pushed to the brink by the pandemic. Money raised will support life changing projects.