With tougher terrains and adrenaline-filled challenges, two teams led by The One Show favourites, Owain Wyn Evans and Angellica Bell, battled it out over 4 days attempting to balance Red Noses on spoons as they took on the ultimate race across the Lake District.

With tougher terrains and adrenaline-filled challenges, two teams led by The One Show favourites, Owain Wyn Evans and Angellica Bell, will battle it out over 4 days attempting to balance Red Noses on spoons as they take on the ultimate race across the Lake District.

The two teams took on an exhausting and daunting adventure across some of the Lake District National Park’s most famous and formidable climbs, depths and challenges, as they made their way from Elterwater towards the finish line at Buttermere. The teams had to stop their Noses from dropping to avoid time penalties and after 4 exhausting days of racing the Yellow Team were crowned the winners!

The two teams will take on an exhausting and daunting epic adventure across some of Lake District National Park’s most famous and formidable climbs, depths and challenges, as they make their way from Elterwater towards the finish line at Buttermere. The first team that makes it to the finish line with their Red Nose on a spoon wins. The teams will need to stop their Noses from dropping to avoid time penalties and the winners will be crowned live on The One Show at the end of the week.

If you’ve been following the race and would like to make a donation – it’s not too late. Your donations will help people in the UK and around the world live free from poverty, violence and discrimination and support them with their mental health. Whatever you can give - your donation really does have the power to change lives.

The One Show Boxes 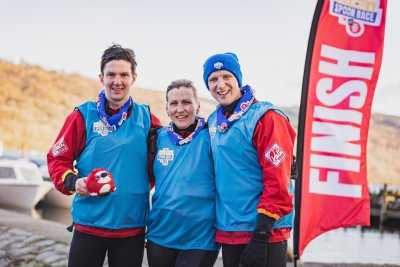 Owain was joined by Sally and Oliver, who were representing some of the amazing projects Comic Relief supports.

Sally is a mum of 4 who, during and after her 4th pregnancy, struggled with severe stress, anxiety and low self-esteem. Sally was supported by Nurture the Borders, a Women’s peri-natal mental health charity who provide peer support for women during pregnancy and the first two years with baby. Sally now works for Nurture the Borders as a specialist perinatal support officer, helping other women going through similar experiences.

Oliver was born deaf, but that certainly hasn’t held him back. From a young age, Oliver and his family received support from The Elizabeth Foundation. They worked with his parents to show them how to engage with their son in a way that would help him, and also supported Oliver so that he was in the best possible place to start school. Oliver says, “The Elizabeth Foundation gave me the foundation on which I’ve built my life. 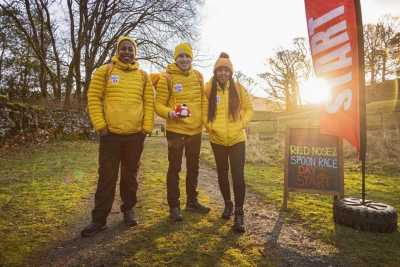 Angellica on The Yellow team was joined by Sean and Cherrelle, who represented some of the incredible projects Comic Relief helps to support.

Sean was taking on this challenge for his son. Sean’s world was turned upside down when he and his wife found out their unborn baby had Spina Bifida. The couple were left reeling from the news, but found Spina Bifida Hydrocephalus Scotland who welcomed them with open arms. Sean’s son, Andrew, is now a confident and happy 5 year old, full of life and fun and has a younger brother Fraser.

Cherrelle came from a troubled family background and boxing turned her life around. Having gone on to have a career in both amateur and professional boxing, now she’s helping others to do the same as a mentor to young people at Fight 4 Change. “I just had one person who said I will help you, and I think that’s what our charity stands for... we don’t turn anyone down.”

You can re-live all the action form this epic adventure on BBC iPlayer(opens in new window).

The Red Nose and Spoon Race wouldn't have been possible without the incredible support of our partners and suppliers. A massive thank you to Berghaus, Regatta, Dryrobe, Princeton Tec Head Torches and Klean Kanteen Water Bottles, Sealskinz.