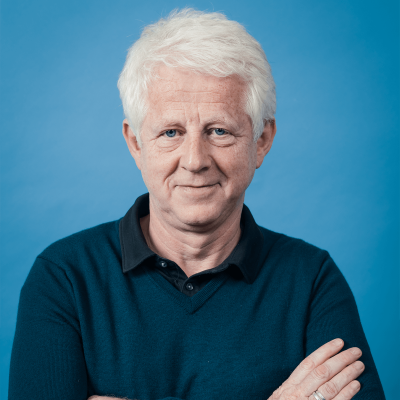 Richard Curtis is a film writer and director, responsible for films such as Four Weddings and a Funeral, Notting Hill, Bridget Jones’ Diary, Mr Bean, Love Actually, The Boat That Rocked, About Time and most recently Danny Boyle’s Yesterday.

In the other half of Richard’s life he is co-founder and vice-chair of Comic Relief, which he started after visiting Ethiopia during the 1985 famine. He has co-produced the Red Nose Day live night of TV for the BBC since 1988 and the charity has now made over £1 billion for projects in Africa and the UK during that time. In 2015, he helped to bring the massively successful Red Nose Day to the United States with NBC.

Richard was a founding member of Make Poverty History and worked both on that campaign and on Live 8 in 2005. As part of his contribution to the MPH campaign he wrote The Girl In The Cafe for HBO and the BBC - a television drama based around the G8 summit, which won 3 Emmys. In 2012, Phillip Noyce directed Richard’s TV movie 'Mary and Martha', a film about two mothers losing their sons to malaria. It has been shown in 50 countries around the world and used as a campaigning tool by many organisations committed to ending malaria.

Richard is currently leading Project Everyone - a team working to make the UN’s Global Goals as famous and therefore as effective as possible in their drive towards ending extreme poverty, combatting the threat of climate change and fighting for equality and justice worldwide.