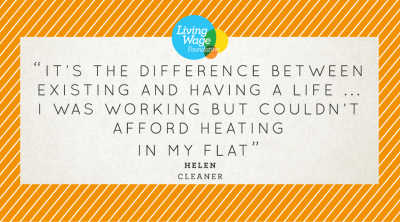 This week it’s Living Wage Week, and Comic Relief is celebrating along with over 5,500 other workplaces across the UK, from coffee shops and other independent businesses to the likes of Ikea, Nationwide and Google. Why? Because when it comes to wages, these employers all go beyond the government minimum and commit to paying a real living wage; an hourly rate that reflects the true cost of living.

These rates are calculated independently and reviewed each November. Hot off the press this morning, the Living Wage Foundation(opens in new window) has announced the newly-uplifted figures; £9.30/hr across the UK and £10.75/hr in London (which reflects higher living costs in the capital). Over the coming weeks, accredited Living Wage Employers like Comic Relief will ensure that their staff and contractors’ pay-packets are raised in line with the new rates. Workers who might otherwise be paid the government minimum – office cleaners and catering staff for example – will receive a wage they can actually live and thrive on. See how the rates compare in this table:

Comic Relief, which first began in 1985, keeps going because we hope and strive for a “just world free from poverty”. There’s no doubt that founders Lenny Henry and Richard Curtis set us an ambitious vision, but it’s the job of our staff to work backwards from this big dream and to find and support the organisations that will help achieve it. The Living Wage Foundation is one such organisation.

In 2014 Comic Relief accredited with them as a Living Wage Employer – and we’ve not looked back. The following year we were a founding member of the Living Wage Funders(opens in new window) network with Barrow Cadbury, People’s Health Trust and Trust for London. Now 50 members strong, the network supports UK charities to pay the real living wage through our grant-making. In practice, at Comic Relief this means we look at applicants’ budgets and talk with them to try and ensure that any salaries we support in the UK are paid at real living wage rates or higher. Our approach is explained in more detail here.

Comic Relief is also proud to have invested directly in the Living Wage Foundation’s work. Our grant of £120,000 was awarded in 2015, and this supported them to treble the number of Living Wage Employers in three years to over 5,000. This in turn has meant pay rises for over 200,000 people and nearly £1billion more going directly into the pockets of workers.

Steadily the living wage movement continues to grow; a positive force helping to tackle low pay and in-work poverty in the UK. As well as the moral case(opens in new window), the business benefits(opens in new window) are becoming ever clearer. So this Living Wage Week we invite you to join us! Are you an employer? Start the accreditation journey today(opens in new window). Employee? Begin a conversation in your workplace. And fellow funders – join our expanding network(opens in new window)!

In the words of the Living Wage Foundation, a hard day’s work deserves a fair day’s pay. We should be paying people a wage they can really live on.