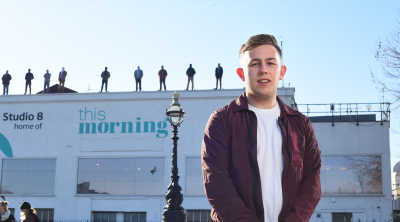 At Comic Relief one of our core issue areas is Global Mental Health, and it has been a priority for Comic Relief’s funding in the UK for over ten years. We have invested in therapeutic services, services for young people, campaigning and policy change work, anti-stigma and discrimination work and maternal mental health.

However, 70% of suicides in the UK are men who are struggling with mental health issues, unable to speak about them freely due to stigma and hard-grained societal definitions of masculinity. Thankfully, there are great charities and projects at hand, supported by Comic Relief, to offer support. Meet Matthew from the North East.

Matthew remembers the day that, Daniel, took his own life. Matthew was 10, and Daniel was 19. Hearing his mothers’ screams, Matthew ran to get help, innocently unaware that it was too late to save him. They never found out why Dan decided to take his own life, and 15 years later, they still don’t know.

“We still don’t know why Dan chose to do what he did,” Matthew recalls, “from the outside he had everything going for him and we had no idea that he was struggling.”

Over 70% of suicides in the UK are men. Shortly after Dan’s funeral, Matthew started campaigning, and started If U Care Share, to try and get more men talking about mental health stigma and in 2011 it became a registered charity. _If U Care Share _recently joined forces with the Campaign Against Living Miserably (CALM), who provide support to high-risk young men in crisis using funds raised through Red Nose Day.

CALM, with the support of Comic Relief, is building on the capacity of its front line services, expanding their oversubscribed helpline and web chat in order to reach more young men in crisis, help them to better manage their mental health and reduce the risk of suicide.

But despite all of his hard work campaigning_, _Matthew himself found it difficult to open up about how his brothers’ death affected him…

“I hid my emotions in front of Mam and Dad. I was 21 before I really grieved for Dan. I hadn’t allowed myself to feel what I needed to feel. I’d almost built a script and the last three years have been a massive learning curve in understanding my own mental health, and how important it is to really talk.”

CALM believes societal definitions of masculinity play a significant role, making it difficult for men to recognise and talk about their problems. But with hard campaigning from CALM, Matthew, other organisations and individuals who recognise the importance of encouraging men to open up about their problems, Prime Minister Theresa May appointed Jackie Doyle-Price as the government’s first Minister for Suicide Prevention in October 2018.

If you want to talk to someone, please call any of the following services which are there to help: