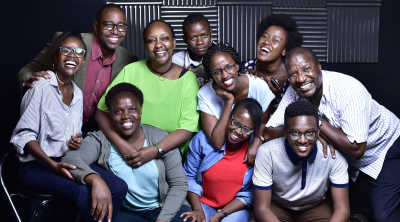 Author: Dilhani Wijeyesekera, Head of Influence Comic Relief  Contributors: Judy Kibinge, Founder and Executive Director of Docubox, and Phoebe Ruguru, Impact Produce We all tell stories. It’s the foundation of how we relate to one another, and binds us as human beings, sharing our experiences to say something about who we are and what we believe. Stories also have the power to uncover the truth, surprise us, and in my opinion, can drive genuine social impact. I’ve spent most of my life and career in and around incredible social storytellers, whether it was the joyful and comedic stories my dad and his brothers told us as kids about growing up in Sri Lanka, to working with incredible young women in Tanzania to share the stories that mattered to them.    When I joined Comic Relief we were at the start of a big journey to find new ways to tell stories about the issues we work on that could make it into the mainstream, but were told by artists who were much closer to the issue or the geographical area.  Sema Stori is one pilot which is working with skilled and locally rooted film makers to share stories about the issues we support from their own perspective. It focuses on creating documentary shorts which will be made through small awards to talented film makers in the region, and with support to assist film makers in accessing mentoring, tapping into opportunities for their films to be seen, and focusing up front on the social impact they want to create.  The project is led by Docubox – an African led film fund, run by African film makers for African film makers. It is unique, and was founded by award winning self-taught Kenyan born filmmaker and writer Judy Kibinge, known for producing critically acclaimed films including, ‘Coming of Age’, ‘Dangerous Affair’ and ‘Something Necessary’, screened at the Toronto International Film Festival.  We’ve been working together for well over a year, and co-created Sema Stori as an exciting pilot platform which could house a range of partner projects and collaborations to test new forms of story-telling in a global setting.  While creative story-telling is a growing industry in East Africa, Judy believes that investment to support local film makers to make artistic stories is still limited. Many films created in the region on social issues are promotional. Docubox conducted research to better understand what was holding back the region in making and distributing artistic social documentary, identifying key challenges including lack of access to funding to get films of a high enough standard to gain exposure; and lack of technical support for film makers to get their films seen.  Judy says: “I was too familiar with how difficult it was for African filmmakers to keep making excellent work without more support – funding, technical input, networks, the list goes on.  We couldn’t have been readier to have a conversation with Comic Relief when we heard about the direction they wanted to take”  Almost a year in the making, Sema Stori (Stories that Speak) has emerged, and is making awards to 10 talented East African film makers who see themselves as change makers. Through a combination of one-off grants and a range of ongoing support including creative labs, mentoring, post-production input, and advice to establish impact activities, we hope film makers will take us into topics in a different and intimate way that brings new perspectives.  Judy adds: “We’re so excited and looking forward to supporting the creation of this series of short films – important stories told by local voices. We’ve left it entirely to our filmmakers to let us know what stories they are burning to tell, and Docubox and Comic Relief can’t wait to keep you posted about them all”. If you’re wondering what impact driven storytelling is all about, Thank You For The Rain(opens in new window) is a great example of this supported by a range of organisations including Docubox. Released in 2017, it follows the story of a Kenyan farmer Kisiilu who started to use his camera to capture the life of his family, his village and the damages of climate change. During the film we see him transform from a father, to community leader, to an activist on the global stage inspiring climate action.   Watch this space for more news as Sema Stori unfolds, for my own part, I hope the story behind the story will end up being as powerful as the stories themselves!