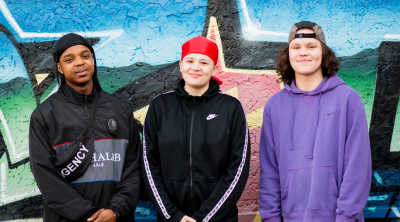 This week, Comic Relief is celebrating young people who are leading social change in their communities, as part of #iwillWeek.

Young people all over the UK are doing incredible things to change their communities and the lives of the people who live there for the better. Communities need young people to participate, and young people need opportunities to grow, develop and learn new skills – creating opportunities for social action helps to meet both those needs.

But just 5% of adults think that young people today are very likely to take part in social action (activities to make a positive difference to others) and only 4% selected “selfless” from a list of adjectives to describe young people today1. In reality, 60% of young people take action to help other people or the environment every year, and 74% of them care about contributing to make the world a better place2.

#iwillWeek is an opportunity to shout about the positive change young people are creating in communities across the country, as volunteers, mentors, campaigners - and much more.

Community Recording Studios provides intensive face-to-face youth work to support disadvantaged young people from the St. Ann's area. They engage young people to help them move away from youth crime and gang related violence and look to support them into positive and constructive activities.

Joint funding from Comic Relief and #iwill thanks to the National Lottery has been used to create a Hip-Hopera using hip-hop, rap and spoken word to help raise awareness of  mental  health  through  discussion  and information sharing and is helping young people to better manage their mental health experiences.

The breakdown of his first serious relationship left Jalle depressed, feeling suicidal and like he had no reason to keep going. Having always found it difficult to share his feelings, Jalle struggled to open up and found music was his only means of expressing himself.

It was the women in his family who encouraged Jalle to explore his interest in music and, after hearing one of his songs, his grandma told him about Community Recording Studios. His mum then made contact with the project and he started going there almost every day. He now works as a sound engineer, raps, sings and took part in the Windmills’ Hip-Hopera.

Jalle credits the people at Community Recording Studio for helping him rebuild his confidence. He’s now determined to help others change their own lives through music.

He said: “I was going through a breakup, it was my first proper serious relationship. I’m not a very open person, I’ve only started opening up in the past year. I was really depressed and just didn’t know what was going on in my head. It was a hard point and music got me through.

“I want to change lives, kind of what this place has done for me but do it with my music. Mac Miller, he changed my life, he got me through a lot, and I want that impact through my music. I just want to connect with people and make them feel good, the way that artists make me feel good.”

Junior moved from Germany to Derby when he was 11 after his parents separated. He has waged a long battle with his mental health, which previously led to him being hospitalised with psychosis. School was a struggle as he found it difficult to engage with any other subject than music. It was a teacher who suggested he try a college course, where he met his friend Jalle.

Paige grew up in a tough neighbourhood and in her early teens got involved with a ‘bad crowd’, spending her nights hanging around the streets with gangs. At the same time she was finding school a struggle and having to cope with the death of her cousin and one of her closest friends, Paige’s mental health suffered and she was diagnosed with anxiety and depression at 14.

Around that time she was introduced to Community Recording Studios. Paige has been writing lyrics and raps since the age of 12 and could often be found at school in the corridors rapping away with her headphones on which would get her into trouble. Now, being able to explore her musical talent at Community Recording Studios she is in a space where her love of music is supported and embraced and it’s a welcome distraction from the gang culture she was drifting towards.

She also credits the project with rebuilding her confidence, providing a safe space for her to explore her musical talent and giving her a much-needed focus. Paige is now in a positive place and has found a job as an estate agent.

Dr Rania Marandos, CEO of Step Up to Serve, the charity that coordinates the #iwill campaign says: “When young people are empowered, and believe they can make a difference, the sense of possibility they bring to communities is incredible. This is why the #iwill campaign started in 2013. It has since become a powerful cross-sector movement of over 1,000 organisations and young people. #iwill Week celebrates the action they are taking together to transform the role young people play in society, as leaders of the present not just leaders of the future.”

Community Recording Studio is supported by Comic Relief and the #iwill fund, which is made possible thanks to National Lottery and Government funding.

1 Royal Society of the Arts, (2018), Teenagency: How Young People Are Changing the World, https://www.thersa.org/(opens in new window) discover/publications-and-articles/reports/teenagencyhow-young-people-can-create-a-better-world