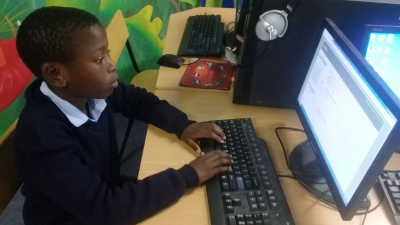 Twelve year-old Liso* loves maths so much he wants to be an IT technician when he grows up. It’s a dream that is far from the reality of his older brother’s life and a path he could so easily have taken. His father died last year and he lives with his mother in a township near Cape Town, an area that has high crime and poverty rates.

Liso’s brother became involved in a gang and made dangerous enemies. He has had to move away and start again somewhere new to protect himself and his family.

Liso said: “I felt happy that he was taken away from home and Cape Town because I knew that he was now much safer than being here and because it also put my life and my mother at risk. The other gang would come and look for him at the house, which meant we were also not safe because we would also be harmed just to spite him. So our lives were also in danger.”

Going to school and getting a good education is key to Liso improving his life chances and with the support of a Comic Relief funded Maths Programme being run in his school by a project called Green Shoots he is embracing learning and improving his grades.

The children in his class are being given the opportunity to learn maths online with activities such as quizzes and brain tests that are in line with the schools curriculum. Results are given in real-time which help both the learner and the teacher. The system is building on the maths tuition the kids get in the classrooms and is improving their enthusiasm for learning as well as their scores.

Liso said: “When I get to the lab we all compete with each other on who is going to do much better so we all give it our best and want to score high and master the challenge. I enjoy being both in class and the lab.”

The programme also enables Liso to continue improving his maths outside of school hours. His mother works long shifts so isn’t around to help him much with homework and his family don’t have the money to buy him a computer for home. But with the Maths Curriculum Online he is able to go to his local library and continue to do tests and games on the internet there.

Liso said: “I am sure my mom would be very willing to help out with my maths practises but she comes home late, tired and needs to cook for the house. I love mathematics and am so happy that I can get help at the library. Our school has a Maths programme so I can also use it on the internet in the library.”

Liso’s teacher has seen a positive change in him since they started using the Programme and believes he has a much brighter future.

“In the first term when they arrived in grade 6 they couldn’t understand most of the maths concepts whereas they were taught in the previous grade. Learners had a negative attitude towards maths. Now they are enthusiastic to go to the computer lab to learn maths by using Maths Online. There is much confidence in the learners, the attitude is positive as well as the improvement”

A firm foundation in Maths in the Primary years should be non-negotiable. The quality of teaching and learning in Primary Maths in South Africa urgently needs improving. Green Shoots project uses existing ICT equipment, innovative maths software, and training, support and mentorship for teachers, principals and district education officials, to improve early grades maths teaching in the Western and Northern Cape provinces of South Africa. The project will generate evidence that supports and informs the wider uptake of the model nationally.

What we’ve learned about using Sport for Change to empower young women and girls: Insights from our Levelling the Field 1.0 programme in Malawi, Rwanda and Zambia.

Learning about learning in sports for change programmes (and beyond)