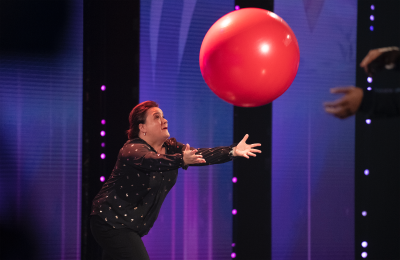 Airing on Saturday 29th February at 8:30pm on BBC One

Catchpoint, the quiz show where teams of two compete to win a jackpot by answering questions and catching balls is set to return to BBC One on with two Sport Relief specials ahead of the new series.

Hosted by Paddy McGuiness and made by Possessed and 12 Yard, both part of ITV Studios, Catchpoint is the very first physical game show where contestants need quick reflexes and brains in order to win a cash prize in the ultimate battle of brains and balls.

The second episode will see former England cricketer Graeme Swann and The Mash Report’s Rachel Parris come face-to-face with comedian Mark Watson and England hockey star Sam Quek. The money raised in these special episodes will help Sport Relief take on domestic abuse, mental health, homelessness and child poverty both in the UK and around the world.

Following the Sport Relief specials, the main series will see pairs of hopefuls seeing if they have what it takes to walk away as big winners as Paddy welcomes more willing contestants to the Catchpoint studio.

Host Paddy McGuinness said: “I loved the Sport Relief specials and filming series two feels like everything clicked into place. The sport stars are a different breed. You can have a laugh and a joke with them but soon as it comes to catching that ball they go full tunnel vision laser focus! If they ever drop one you can see they really take it to heart.

Comedian Susan Calman said: “The reason I support Sport Relief is the range of fantastic projects, and people, donations support – in Scotland, the UK and internationally.  Filming this episode was a great fun, I haven’t laughed so much in a long time, and what I will say, is it’s much harder than it looks!

English netball player Eboni Usoro-Brown said: In my role as goalkeeper for England’s netball team, I’m used to reaching for balls under pressure. However, nothing could have prepared me for the amount of pressure I would feel taking part in this Catchpoint Sport Relief special. It was great fun but the stakes were so high, is was quite nerve wracking. I’m very grateful for the opportunity to make a difference in people’s lives, and I can’t wait to see people up and down the country getting their kit on and raising money together for Sport Relief.”

Comedian Darren Harriott said: General knowledge mixed with sport… I would say I’m rubbish at both however I jumped  at the chance to raise money and be a part of Sport Relief as I think it does vital work for people and communities in need. However I had no idea that catching balls whilst filming Catchpoint for Sport Relief was so hard...I think next time, I will practice”

Comedian Rachel Parris said: “I jumped at the chance to take part in this Catchpoint Sport Relief special, even though I am, and always have been, terrible at sport. It was a fantastic opportunity to have some fun while raising cash for a good cause. Like most people, I've had personal experience with mental health problems and so for me this was an opportunity to give back and support mental health projects, both in the UK and internationally.”

Former British hockey Olympic gold medallist Sam Quek said: “I jumped at the opportunity to take part in the Catchpoint Does Sport Relief special because it was such a great chance to raise money and awareness for the brilliant work Sport Relief does. Having played for my country, I know the unifying power that sport can have, and I hope that viewers up and down the country tune in to watch us play for a brilliant cause.

For more ways to support Sport Relief, find out how you can get involved here.