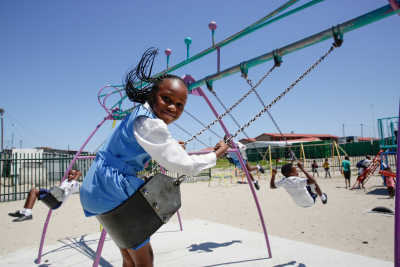 According to the UN, 70 per cent of the world’s population is predicted to live in urban settlements by 2050, generating a growing challenge of dealing with the effects of rapid urbanisation. These include a lack of proper housing and growth of informal settlements. Informal settlements are residential areas with poor quality housing where residents have no rights to land on which they live, lack or are cut off from basic infrastructure and services, and often experience poverty, unemployment, high crime rates and risks to their safety.  Safe and secure shelter is a human right: everyone is entitled to an adequate standard of living including access to food, clothing and housing. For people to thrive with dignity and confidence, they need access to not only basic housing, but the ability to create a home in which they feel safe and secure.

In 2012, Comic Relief and UK aid came together to try and address these challenges. Together, and with your support, we’ve invested £20m in 19 amazing organisations in Freetown (Sierra Leone), Cape Town (South Africa), Kampala (Uganda) and Lusaka (Zambia). These organisations have brought together local people and government representatives, as well as civil society organisations, and worked together to improve the livelihoods and uphold the rights of people living in informal settlements in the four cities – and they have succeeded!

What did the programme achieve?

We know positive change can happen when people come together and work collaboratively towards shared goals. Comic Relief chose to fund a range of different organisations working on different issues but within the same cities believing that by working collaboratively, they could achieve greater impact than working in isolation. Over the life of the programme, collaboration strengthened the individual contributions of each organisation and better supported systemic, sustainable city-level development and change that was responsive to the needs of the poor.

Spotlight on our partner Violence Prevention through Urban Upgrading (VPUU)

VPUU is a community-based organisation in Cape Town, South Africa, that aims to create safe communities and improve the quality of life of informal settlement residents. With their funding, VPUU achieved success in a number of areas, including:

We’ve learned a lot through the FCI, including:

Comic Relief will continue to use these lessons learnt from the FCI in our future work and joint programmes with UK aid.

And in Cape Town, Freetown, Kampala and Lusaka, thanks to your support, the relationships and ways of working that funded partners have established have laid the foundation for their work to continue together now that our funding has come to an end. For example, one funded partner in Cape Town recently mobilised their partners and networks to successfully influence the government’s Covid-19 response in informal settlements. Changes to policies that funded partners have achieved have the potential to positively shape the lives of those living in informal settlements, if implemented successfully into the future.

Comic Relief is really proud of the positive change that our partnership with UK aid has contributed to. Thank you for being a part of it.