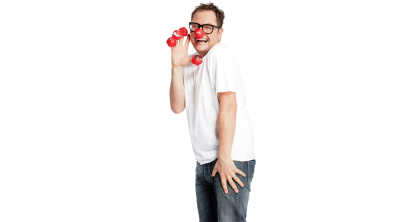 Sainsbury’s shoppers are in for a treat this week as comedian Alan Carr’s voice rings out on self-checkouts, alongside the official Red Nose Day merchandise in-store.

The first of the Sainsbury’s stores to get the Chatty Man treatment is Fetter Lane in central London, with a gradual roll out across over 1000 UK stores throughout the week and remaining until Friday 15 March - Red Nose Day.

And when the transaction is complete, lovely Alan’s voice will ring out “And don’t forget it’s Red Nose Day on the 15th March!” instead of “Thank you, goodbye”.

The check-out trick and the in-store merchandise are just two of the ways Sainsbury's are supporting us in the run-up to Red Nose Day. The retail giants are also celebrating 20 years as our official partners.

Alan Carr, who was part of the fantastic line-up at Comic Relief’s first ever Comedy Spectacular on Thursday the 28 February, said: “I’m known for loving a good chat so when Comic Relief and Sainsbury’s asked me to lend my voice for the checkouts, I couldn’t say no!

"I’m delighted to be involved with this campaign and I hope that my voice helps Sainsbury’s and Comic Relief to raise as much money as possible!”

Alan Carr has been such a great sport backing Comic Relief in so many ways. Sainsbury’s is a brilliant partner and they bring the stores to life with merchandise. This makes buying even more fun.”