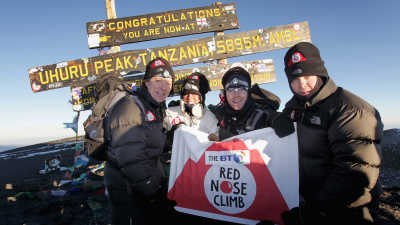 All nine incredible Kilimanjaro climbers proved today that there ain’t no mountain high enough as they all reached the summit, one by one, in the early hours of this morning!

Guided by the moon throughout the freezing night, they reached the summit at varying stages from 4am this morning led by Ben Shephard. In a staggered and agonising approach, all 8 climbers arrived within 40 minutes of each other, Ben, Fearne, Denise and Cheryl were first followed by Kimberley, Ronan and Gary and then Chris. The 9th climber, Alesha, had the toughest time and fell behind the group, having to stop to address severe muscle pain and the effects of altitude but, determined not to let the group down, she ploughed on at a snails pace arriving a gruelling 2 hours after the others collapsing in a heap at the top.

Biting winds, temperatures of -15 and the high altitude made their trek extreme and it wasn’t until they began descending that any of them had a chance to watch the sunrise over the continent at the highest peak in Africa.

In an incredibly display of pure grit and determination, the nine celebrities have defied all odds to reach the summit as a team. Along the way they’ve overcome injury, vertigo and acute altitude sickness through their sheer resolve to raise as much money as possible for Comic Relief.

On reaching the summit the celebrities were overwhelmed as their achievement hit home.

Jeremy Gane from Charity Challenge who led the trek said “I have climbed the mountain 21 times and I have never met a more spirited, determined and humorous group who were determined to reach their goal from the outset. When the going got tough their camaraderie was unbelievable one picking the other up when a low point struck, willing each other to go on and achieve the most extraordinary feat. No-one should under estimate how gruelling this climb is. They have done this climb in the same way that any member of the public can do this climb and the scale of this undertaking is enormous which is why I think the public have been so generous."

The final push to the summit took a gruelling four hours for the fastest, trekking through steep rocky terrain in brutal gale force winds at sub zero temperatures. Before setting off from camp the team loaded up on rice and potatoes to pack in as much energy as possible, but few were able to sleep in nervous anticipation of what was about to happen.

After spending a short while taking in the breathtaking views from the summit, the team will have plenty of time to reflect on their journey as they face a seemingly endless 12-15 hour descent which is certain to try their patience. The celebrities will spend a final night under canvas at Millennium Camp before a five hour walk down through gentle Rainforest slopes the following day.

Earlier in the expedition Fearne and Cheryl both collapsed with exhaustion and altitude sickness and received anti sickness injections.