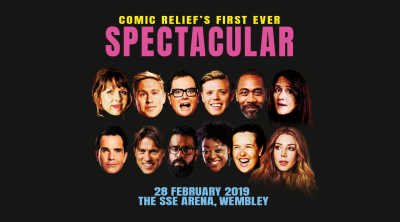 Bringing together some of the biggest names in comedy for the first time ever, Comic Relief is getting ready to provide an epic night of laughs at The SSE Arena, Wembley. One night, one stage, eight comedy giants, Comic Relief’s Spectacular will be taking to the stage on 28th February 2019.

Katherine Ryan, appearing on the night, says “I can’t wait to take part in the first ever Comic Relief Spectacular. With a name like that, you know it’s going to be an extravaganza!”

While Comic Relief Co-Founder, Sir Lenny Henry, says “I’ve been involved with Comic Relief from the very beginning and having a laugh has been at the heart of everything we do, so I’m delighted to be a part of this massive show with such a cracking line-up of comedians. I can vouch for the fact that money raised for Comic Relief does incredible things and proceeds from this gig will make a massive difference to even more people’s lives.”

The SSE Arena, Wembley is an iconic venue - can you imagine the sound of 12,500 people laughing? Music to our ears! - and with all proceeds going towards helping people both here in the UK and around the world, we couldn’t be more excited.