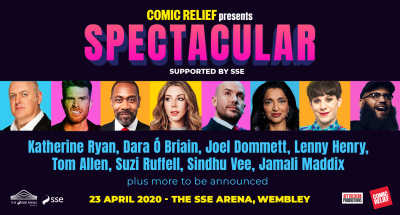 Comic Relief is getting ready to provide an epic night of laughs, bringing together some of the biggest and best comedians in the country as its Spectacular comedy show returns to The SSE Arena, Wembley, on Thursday April 23rd, 2020.

Today, a flavour of the star-studded line up can be revealed, with comedy heavyweights Dara Ó Briain, Katherine Ryan, Joel Dommett, Lenny Henry, Suzi Ruffell and Tom Allen all pledging their support.

Rising stars Jamali Maddix and Sindhu Vee are also set to take part - with top talent and some very special guests still to be announced.

Katherine Ryan said: “Last year’s Spectacular was so much fun - I can’t wait to take part again. I’ll be joined by some of the biggest names in comedy for a life-changing night of laughs and it’s all for a brilliant cause, with money raised enabling Comic Relief to help people right here in the UK and around the world, too.”

Tom Allen added: “What an amazingly exciting thing to be performing at the world-famous SSE Arena, Wembley. I for one love any excuse to use the Jubilee Line but this will be extra special as buying a ticket also means you’ll be helping Comic Relief to support vulnerable people and communities in the UK and internationally. So grab yours now, it’s going to be so much fun!”

Lenny Henry commented: “I’ve been involved with Comic Relief from the very beginning and having a laugh has always been at the heart of everything we do. I’m delighted to be a part of this huge night of comedy with such a cracking line-up of comedians. I can vouch for the fact that money raised for Comic Relief does incredible things and proceeds from this gig will make a massive difference to even more people’s lives.”

The event is supported by our friends at SSE, the venue title sponsor, who have kindly donated a night at the Arena to Comic Relief.

Guaranteed to be one of the biggest nights of the comedy calendar, the show returns a year after Comic Relief’s first Spectacular show, which saw Russell Howard, Katherine Ryan, Alan Carr, Rob Beckett, Romesh Ranganathan, John Bishop, Jimmy Carr, and many more perform.