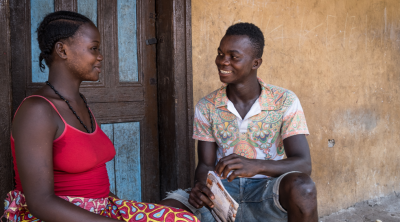 A child is still dying from malaria every two minutes, with more than 200 million new cases in 2018, the WHO World Malaria Report has revealed. And while malaria deaths and cases are declining, the rate of progress in tackling the disease globally has continued to plateau – with pregnant women and children in Africa most at risk.

The report(opens in new window), released today, also highlights the need to step up the fight against malaria if the progress that has been made so far is to continue, and ambitious targets to achieve a malaria-free world within a generation are to be reached.

Comic Relief is determined to continue its work in the fight against malaria, including through its partnership with GSK - working together in new and innovative ways to tackle the disease and strengthen local and national health systems in communities in some of the most affected areas in Africa.

Last year we told you about one of the Partnership’s innovative projects which is working with young people fighting malaria in Sierra Leone, where the disease is the leading cause of death. The project run by Restless Development(opens in new window) is training 50 young people to develop new youth-friendly approaches to raise awareness of malaria and to improve access to health care services, especially amongst unmarried mothers and pregnant teenagers who are often stigmatized, isolated and, together with their babies, are most at risk of malaria. The aim is to empower these young people to give them the confidence to use the information they collect through their research to influence key decision makers – and they have made an incredible impact on community members so far:

Kadiatu, or Mammy Kadie as she is fondly called in the community, is a 48-year-old mother-of-four market trader and the current chair lady of the women’s market.

Kadiatu used to visit the hospital almost every month with malaria to get treatment. She wasn’t cleaning her home environment and wasn’t sleeping under a bed net either. She often had to take time off from her work for treatment and her children often got malaria too, and she really worried about them. But, thanks to Restless Development’s young researchers, she, and others in her community, now better understand the causes, prevention and treatment for malaria.

She says that the young researchers have played a leading role in raising awareness in her community especially on the accessibility of insecticide-treated bed nets. As a result of this, people's behaviours have changed - with more using the bed nets, and going to the hospital for malaria tests and treatment.

When Restless Development started their project in 2017, the Section Chief, Pa Alimamy Sesay, attended a stakeholder workshop and realised what a huge problem malaria was in his community. Following this, he introduced strict regulations to help control malaria, which included introducing fines for people who misuse bed nets - such as using them as fishing nets or cutting them up to use them as washcloths - and fines for people who don’t clean their home environment properly, leaving stagnant water which is a breeding ground for mosquitos.

Pa Alimamy Sesay is the first and only chief in his area to have introduced these regulations, and has also supported the young researchers in raising awareness about free access to malaria treatment and bed nets to his community.

As a result, he says that he has seen major changes in behaviours, attitudes, and the prevention of malaria in the community – and feels much more optimistic in the fight against malaria.