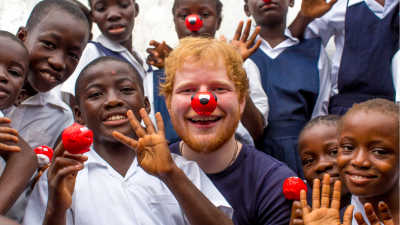 Superstar Ed Sheeran is amongst a whole host of comedians and celebrities getting involved in this year’s Red Nose Day on Friday 24 March, to help transform lives here at home in the UK and across Africa.

The world-famous singer-songwriter joined Comic Relief on a visit to the Liberian capital Monrovia, where he met children living on the streets, many of whom had been orphaned by the recent Ebola outbreak.

During his trip, Ed visited the Street Child Liberia project which uses Comic Relief cash to help give vulnerable children a better future, reuniting them with their relatives and helping them get back into school.

“I’ll never forget the kids I met on this trip," Ed said, "when we sang together they were in such high spirits despite everything they’d been through.

“It was an incredibly eye opening experience and I‘m really proud to support Comic Relief and see what they are doing to help these children have a better future.”

Ed’s not the only celeb doing his bit, The Red Nose Convoy(opens in new window) will see three pairs of celebrities get behind the wheel for an African road trip like no other. Reggie Yates, Michaela Coel, Russell Kane, Hugh Dennis, David Baddiel and Katy Brand are swapping their home comforts for life on the road as they make their way from Kenya to Uganda, delivering crucial supplies to Comic Relief funded projects en route.

And it wouldn’t be Red Nose Day without piling on the fun. Catch the hottest new comedy talent around at our Comic Relief Live(opens in new window) gigs, get your Mel and Sue fix as they host brand new show Let’s Sing and Dance, and watch the Noses come to life in our celeb-voiced digital comic strip, Comic Adventure(opens in new window).