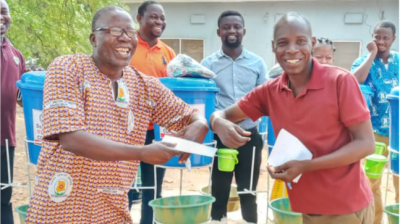 COVID-19 is threatening the progress made against malaria, one of the world’s deadliest diseases, warns the World Health Organisation's annual World Malaria Report published today. The worrying news comes as communities in Africa share how lessons they’ve learned in tackling both malaria and Ebola are helping them in this new fight against the pandemic.

The report(opens in new window) shows that although countries have dramatically reduced the total number of malaria cases and deaths since 2000, progress in recent years has stalled. In some countries, malaria – which is both preventable and treatable - is on the rise.

The pandemic may even set things back further, with the report warning that COVID-19 could result in between 20,000 to 100,000 additional malaria deaths.

Partners, Comic Relief and GSK, who have been supporting communities fighting malaria for four years, have been responding to the critical needs of projects across Africa and The Greater Mekong as they urgently look to protect people simultaneously from the devastating impact of both coronavirus and malaria, especially pregnant women and children under five.

In Sierra Leone, Western Africa, King’s Global Health Partnerships works in Connaught Hospital, Freetown’s busiest public hospital. The organisation has applied the lessons from both its work to tackle malaria and its work during the 2014 Ebola outbreak, which indirectly increased the number of deaths caused by malaria because people were scared to seek treatment at the hospital. These lessons include training health workers, educating communities, and encouraging people to seek treatment when needed.

Since the pandemic started, they have delivered specially designed training and mentoring for more than 200 frontline health workers and established a new team of screeners now stationed at the hospital’s main gate to monitor for suspected COVID-19 cases and enable a fast and safe isolation process which has protected the rest of the hospital, keeping it open for thousands of people to continue to receive care including malaria tests, diagnosis and treatment.

Laura Hucks, Director of King’s Global Health Partnerships, said: “In the countries where we work, the absence of a strong health system means that there is an extreme vulnerability to the COVID-19 pandemic. I’m really proud that we are bringing the skills and expertise of King’s to work in solidarity with our partners on the frontlines of the response”.

On Our Radar, with funding from Comic Relief and GSK, has trained more than 60 reporters across Sierra Leone to find, produce and share powerful and personal stories about how malaria affects their and other people’s lives.

When reporters spent time at Kamakwie Hospital, situated in a very rural district in northern Sierra Leone, at the start of the pandemic, they learnt that attendance at the hospital dropped after communities heard rumours that they would be injected with a virus-laden vaccine, used for clinical trials and extorted for money. Many thought they would be infected with the virus and die. With the devastating impact of Ebola in recent memory, many feared being quarantined and not being allowed to return home.

The hospital would usually see between 100-150 new patients per day during July – when the first case of COVID was recorded - but shortly after, fewer than 20 patients per day sought care. Medical records on the paediatric ward showed an increase of one third in malaria deaths in children under the age of five between March and September 2020, compared with the same period in 2019.

“During COVID patients refused to come because they thought they would be infected. During the virus that was the peak of the rainy season so they didn’t come, they thought there was a pandemic around, they prefer to die at home. They thought coming to the hospital they would have the virus and die, so they don't come. And the poor road network won’t let them come. These are the major factors responsible.

“COVID and Ebola are pandemics. Malaria is endemic, it has been living with us for years. All hands must be on deck to rid the scourge of malaria, this is the greatest killer in Africa.”

These key learnings follow new research commissioned by Comic Relief and GSK, ahead of the publication of the World Malaria Report, which has also revealed strong support among the UK public for tackling malaria around the world.

The research, carried out by YouGov in October 2020, spoke to a representative sample of 2,128 people to find out their thoughts on malaria and the role they believe they have in tackling this deadly disease – which is both preventable and treatable.

Comic Relief Chief Executive, Ruth Davison, said: “Comic Relief is proud to have supported the fight against malaria over the last three decades, which remains more important than ever. Through our partnership with GSK, we have seen the impact COVID-19 is having on international organisations on the frontline of the battle, who are responding at record speeds to mitigate the impact of the virus on their vital work.

“But despite strong efforts, it is worrying that recent reports show that due to the impact of Covid-19 and other factors, progress is now slowing in tackling malaria. This year’s WHO Report is a stark reminder that we must all keep up the fight against this disease – which disproportionately affects pregnant women and young children – throughout the pandemic and beyond.”