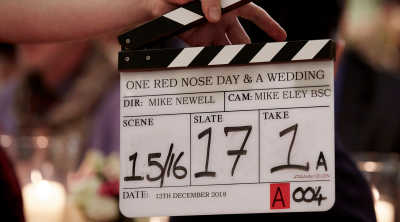 Following the premiere of the One Red Nose Day and a Wedding short for Red Nose Day, fans can now own a piece of the action thanks to an exciting eBay auction(opens in new window) featuring rare memorabilia.

Closing on Sunday, 26 March, the auction offers a treasure trove of all things Four Weddings, including signed scripts by the cast and writer Richard Curtis, a tambourine from the short film signed by Sam Smith and Nicola Walker, an original program from the 1994 Four Weddings premiere and a Tatty Devine ring modelled on the much-loved heart ring from the film.

The outfits auctioned include a Prince of Wales suit worn by Hugh Grant and dresses worn by Andie MacDowell, Kristin Scott Thomas and Lily James for the One Red Nose Day and a Wedding comedy short.

Emma Freud, Executive Producer of Red Nose Day said: “We were thrilled to bring back this iconic film for Red Nose Day and it’s so exciting to now be giving fans the chance to take home some rare memorabilia.”

Money raised through generous bids will go to Comic Relief and all the money raised this Red Nose Day will help change countless lives, both here in the UK and worldwide.