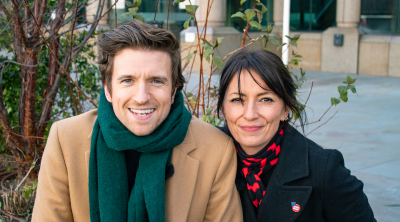 Documenting some of the biggest challenges in Sport Relief history, Greg James’ Sport Relief Heroes is an hour-long show that looks back over the highs and lows of extraordinary celebrity fundraising efforts that have raised millions over the years to help change lives in the UK and around the world.

Greg James meets with Alex Jones, David Walliams, Davina McCall, Eddie Izzard, John Bishop and Zoe Ball, to find out how they each pushed through physical and emotional barriers to reach the finish line, while also reflecting on his own triathlon challenge.

In the name of Sport Relief, these celebs removed themselves from their comfort zones and put their vulnerability on the line. They trained, they took on the near impossible, and they won. Between them, they have scaled rock faces, taken on Ironman triathlons, run thousands of miles, swum the Channel and the Thames, plus much more.

And this year is no different. Viewers will also hear from the team of intrepid celebs that are trekking 100 miles across the Namib desert, scaling the highest sand dunes in the world in temperatures reaching as high as 35 degrees Celsius.

Greg said: “It’s been fascinating to chat one-on-one with this special club of people who have all done extraordinary things during Sport Relief challenges. They all had very different experiences - full of incredible highs and terrifying lows - but everyone I spoke to shared one common desire. They were ready to push themselves to their limits in order to raise money and awareness for others. Finding out what drove them on has reminded me how powerful togetherness and community can be in fighting inequality and overcoming adversity.

Viewers will re-live some of the most memorable moments that hit headlines and moved the public to donate, from Davina McCall taking on Lake Windermere, to supporters lining the River Thames to cheer on David Walliams, to Alex Jones celebrating her birthday on a rock face thousands of feet high. Those tuning in at home, will also see John Bishop make an emotional return to the finish line of his Week of Hell in London’s Trafalgar Square.

Comic Relief co-founder, Richard Curtis, said: “Sport Relief is incredibly grateful for the heroic challenges our  supporters have taken on over the years. They have made people sit up in awe, fear and trepidation at such an unfit bunch doing such big things - brought a smile to faces and the occasional  tears to the eye - and not only raised a huge amount of money themselves, but crucially inspired the nation to get moving and raise extra millions themselves for life-changing projects at home and abroad. I'd like to personally thank Greg, John, Davina, David, Alex, Eddie, Zoe and everyone else who has been pushed way beyond their limits in all the beautiful and bizarre Sport Relief fundraising challenges.”

Davina said: “Reliving the challenges I’ve done for Sport Relief brought back so many memories. I remember when I first started training, I cried every day for a fortnight. I was absolutely terrified of open water and hated running. Even when I was doing the challenge, every time I thought I had nothing left, mentally or physically, there was always a little bit more left in me. I knew I had to finish for all the great projects that Sport Relief supports. That was always in the back of my head. When I look at how generous the great British  public were, it made it all worthwhile."

John said: “I’ll always be amazed at how people become engaged in a Sport Relief challenge. For me, when I started the challenge, I wasn’t aware how much noise it was making and even when I was exhausted, I tried to wave to everyone to say thanks because it was so uplifting and motivational. It brings so many people together and gets everyone engaged with extremely important topics and raises awareness and money that goes such a long way in helping others.”

Alex said : “I will never forget my Sport Relief challenges. I surprised myself because I didn’t think I’d be able to climb Moonlight Buttress but re-watching the footage of me coming over the top will always be a special moment for me. I always hoped that when people saw me do that, they’d think ‘if that Welsh-y can do that then I can do anything’, and the amount of money we can all raise together to help tackle some major issues is powerful.”

David said: “I think the public like seeing people who are not sports people, doing sporty things. An overweight, middle aged comedian, who’s best known for wearing women’s dresses is not someone who you think would really succeed in swimming the Thames or the Channel. But when someone does a challenge, they’re shining a light on something, they’re saying I’m doing this because of something important. When you see a project funded by Sport Relief, you see there’s things in the world you want to change and people you want to help.”

Zoe said: “I remember, I would sit, like everybody else, and watch in awe as David swam the River Thames and think ‘wow, what a human to do that’ and Eddie ran 27 marathons and I couldn’t believe his legs were still carrying him. And I will never forget that moment of seeing Davina breaking down at the side of the water, thinking ‘how is she going to get through this?’ and never once did I think, I really want to give that ago! But when Billy passed, I started thinking there must have been something that I could to do help people and other families who have been in that situation. So, when the call did come to ask if I wanted to do a challenge, it was a 100% yes.”