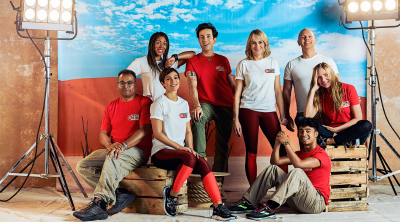 The Heat is On: Sport Relief airs Wednesday 11th March, 8pm, BBC One

Thursday 5th March: The Heat is On: Sport Relief follows the extraordinary endeavours of Frankie Bridge, Nick Grimshaw, Karim Zeroual, Krishnan Guru-Murthy, Louise Minchin, Rob Rinder and Samantha Womack, in a special BBC One documentary, as they attempt an intense four-day 100 mile expedition in one of the most hostile environments on earth.

Airing on Wednesday 11th March, BBC One at 8pm, viewers will be given the full story behind this year’s Sport Relief challenge and a powerful reminder of why addressing mental health issues needs to remain an urgent priority.

Having initially trained for a frozen lake trek in Mongolia, with one week to go, the celebrities suddenly found themselves facing a Namib Desert expedition in Namibia, South West Africa, after increasing global travel restrictions forced a last-minute change of plan. While the elements couldn’t have been more contrasting, the goal remained as clear as ever – to break down the stigma of mental health issues and raise money for mental health services.

The team landed in Namibia to what local guides described as ‘the worst storm in a decade’ which meant the route and plans had to change daily. Facing the unknown each morning, the celebrities battled through emotional turmoil and physical pain for 10-hour days each day until nightfall landed.

Temperatures reached 40 degrees Celsius as they tackled the world’s highest sand dunes, switching between trekking to cycling. Each found themselves on a journey which challenged them both mentally as well as physically. Dr Zoe Williams was on hand to offer medical advice to the celebrities and help keep them motivated during hard times.

Frankie Bridge said: “It’s been some of the toughest days of my life. You cannot prepare for the vastness of the desert, it’s like you’ve been plopped in the middle of space. It was scary and so overwhelming. I’ve cried, I’ve been angry and now I’m so proud of what we’ve done. I don’t want to see a sand dune ever again. I don’t even want to go on holiday. I don’t even want to go near a beach.”

Louise Minchin said: “I’ve been overcome with emotion, I’m completely and utterly exhausted but we’ve had an incredible experience. It’s been really tough and really challenging on a physical front and an emotional front for all of us. We’ve all known why we’ve been doing this, and that’s kept us going hour by hour - to raise money for Sport Relief and mental health charities.”

Nick Grimshaw said: “When you watch people doing Sport Relief challenges on the telly and they’re crying, I always thought, ‘how hard can that be?’ Well let me tell you, hard! But the challenge has been hands down the best thing I’ve ever done. It was so extreme in all senses; physically, mentally emotionally.”

Rob Rinder said: “I invested every facet of my emotional and physical being into this exhausting and breath-taking challenge. The surrealness of the experience was endless and one that I will cherish forever in supporting this life-saving cause.”

During the one hour special, which was filmed by Shine TV, viewers will also get the chance to see how money raised by Sport Relief helps change lives of people across the UK. In the programme, Nick Grimshaw visits a suicide prevention project in Nottingham and Louise Minchin heads to Bristol to visit a group of new mums who have experienced mental health problems related to childbirth.