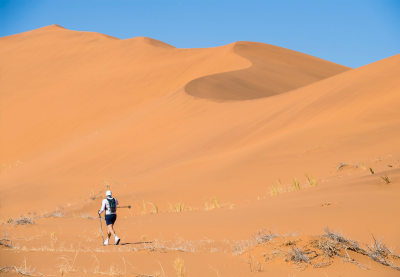 Wednesday 26 February: The team of intrepid celebrities taking on Sport Relief: The Heat Is On, a gruelling 100-mile expedition across the Namib Desert, have passed the halfway mark, as they enter the third day of the challenge and attempt to cover 25 miles on foot and on skis, scaling 19 of the highest sand dunes in the world.

Nick Grimshaw was forced to pull out yesterday due to heat exhaustion, but after a day of rest and a thorough medical assessment from the support crew on the ground, Nick has today re-joined his teammates - Frankie Bridge, Karim Zeroual, Krishnan Guru-Murthy, Louise Minchin, Rob Rinder and Samantha Womack.

Now back together as a full team, they will be trekking and skiing through the desert for more than eight hours today, battling temperatures exceeding 40 degrees Celsius.

The team are doing this for Sport Relief, to help break down the stigma of mental health and raise money for mental health services. One in four people will be affected by a mental health problem in their lifetime, and each of these adventurers feels passionate about speaking up and taking on the elements to crush the stigma surrounding this issue.

An hour-long special Sport Relief documentary will chart the highs and lows (both physical and emotional), airing on Wednesday 11th March at 8pm on BBC One.

Part way through the morning, Louise Minchin said: “There’s hardly any shadow at all and it’s only 10 O’ clock in the morning. I’m looking across miles and miles of the world’s biggest sand dunes and they are so high. We’re taking on 19 of them today. We’ve been talking a lot about why we’re doing it and we’ve all individually got a reason that we’re doing it. It’s hard. It’s relentless. But it’s utterly incredible being in the middle of nowhere in such a beautiful place.”

Frankie Bridge said: “I knew there were big dunes today but I didn’t realise there were so many. Early in the morning when its cloudy and cooler I find it easier but by 8.30am it's already roasting. I just want to get as far as I can, in my own time and at my own pace. I did have a moment arriving in camp last night when I thought, this is just amazing. I've surprised myself today. I think Wayne would be really proud if he could see me. My sons would only be interested in whether I've seen a snake or a scorpion- which thankfully I haven't. I really hope my experience in the desert shows people with mental health issues that you can still do the things you want to do. There have been times that I've wanted to give up but I've somehow managed to push through.”

Karim Zeroual said: “My body is in shock. I hope when I get going that some energy kicks in or it's going to be another really challenging day. We are all on a personal journey. We all have our own goals. The only reason I keep pushing through is because of why we’re doing this. Every time I think I’m in pain, it makes me think about the struggles other people are going through. I’m here to represent young men, young boys, to tell them to speak up about their mental health and not to worry about bravado. Mental health is just as important as physical health. And young men need to open up way more than we do.”

Krishnan Guru-Murthy said: “It’s been absolutely horrific. It’s been far more shocking than any of us thought it would be. It’s been genuinely really difficult. Everything is ten times harder because of the heat. But it is utterly stunning at the top of the dunes. You need to stop and take it in.”

Samantha Womack said: “I think we’ve all been surprised by how many personal challenges we’ve been facing. It’s the extreme conditions and nature affecting us all in very different ways. There’s been quite a lot of illness. Toenails falling off. We’re all battered and bruised. Standing on top of the dunes feels like standing on top of the world. Going up is physically harder but coming down hurts my toes. At the top of a dune, I suddenly saw the sea. It was so far in the distance but it instantly raised my spirits. It was the most incredible thing to see. I feel so privileged to be here doing this challenge.”

Over four days, from Monday to Thursday this week, the team will attempt to cross the Namib Desert in Namibia by foot, bike and ski (on sand) to reach the Eduard Bohlen shipwreck on the notorious Skeleton Coast. Guided by their own navigation skills, they are facing exhausting days in the blistering sun as they take on the highest sand dunes on earth and encounter deadly desert wildlife as they cross the world’s oldest desert - all in temperatures exceeding 40 degrees Celsius.

BBC Breakfast, The One Show and BBC Radio 5Live will all be will be tracking the team’s progress next week. Each day they will follow the group’s ups and downs as they tackle this 100-mile desert challenge of a lifetime, with footage straight from Namibia and daily catch ups as the team take on this epic adventure.

You can support the team by donating to Sport Relief here(opens in new window).