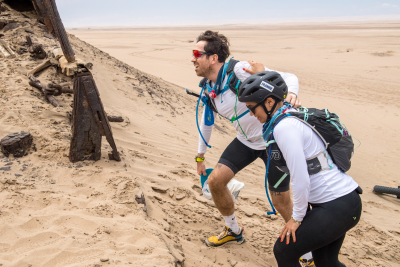 Thursday 27 February: The team of celebrities taking on Sport Relief: The Heat Is On, a gruelling 100-mile expedition across the brutal Namib Desert, have made it to the finish line today after four draining days, which have seen the whole group struggle mentally and physically beyond anticipation.

Today the full team – Frankie Bridge, Nick Grimshaw, Karim Zeroual, Krishnan Guru-Murthy, Louise Minchin, Rob Rinder and Samantha Womack – pushed themselves through the final 13 mile leg on fat bikes in temperatures exceeding 40 degrees Celsius, to reach one of the most famous shipwrecks in the world the Eduard Bohlen on the notorious Skeleton Coast.

Over the past four days, they have been guided by their own navigation skills and faced exhausting days in the blistering sun. They took on the 19 highest sand dunes on earth and encountered deadly desert wildlife, as they crossed the world’s oldest desert, all in the name of Sport Relief.

All the highs and lows, tears and triumphs, will be revealed in full in an hour-long special Sport Relief documentary, The Heat is On: Sport Relief,airing on 11th March on BBC One at 8pm.

Each celeb signed up to the Namibian expedition of epic proportions to help break down the stigma of mental health and raise money for mental health services. One in four people will be affected by a mental health problem in their lifetime, and each celebrity feels passionate about speaking up and taking on the elements to crush the stigma surrounding this issue.

Although they have reached the end of their journey, there is still a long way to go to raise money for much needed mental health services and care so show your support by donating if you can.

Rob Rinder said: “I am elated, overjoyed and thrilled. It’s a real pleasure and delight to be able to share in this physical and mental challenge that means so much to each person here. I am confident people at home will give generously.”

Karim Zeroual said: “That was by far the hardest thing I have ever done, but it is also by far my proudest achievement to date. I have grown as a person and I am proud to be playing a small part in helping to raise awareness of the issue of mental health. It feels like a great achievement to finish as there are so many moments where I wanted to throw the towel in. I pushed myself and I will treasure and cherish this experience for ever.”

Samantha Womack: said “I am broken physically, my toenails are literally hanging off, bruises all over legs with sunburn. I thought I was coming here to do a physical challenge, but it has given me so much time to think. It’s been a bit overwhelming, even Krishnan who is used to extreme situations has been in tears. I am beyond proud of what we have all achieved here. I am so happy; my body is broken but my heart is full.”

Louise Minchin said: “I am utterly broken. It’s going to take me a long time to recover from what we have done over the last four days but I am so, so proud of everyone and of our reasons for doing this.”

Krishnan Guru Murthy said: “We have shown so much courage over the last few days and the group has really surprised me. Every single person has managed pull it out the bag in such extreme circumstances.”

Nick Grimshaw said: “There are lots of times in my life where there are things I haven’t wanted to do and I just haven’t done them. This challenge has made us all pull together, I am so glad I did this.”

Frankie Bridge said: “It’s been a huge rollercoaster of emotions and I am so happy we reached this point. Raising awareness and funding for mental health issues is what has kept me going every day.”

You can still support the team’s heroic efforts and help tackle mental health issues by giving what you can. You can click here to donate(opens in new window) now or text HEAT to 70210 to give £10.