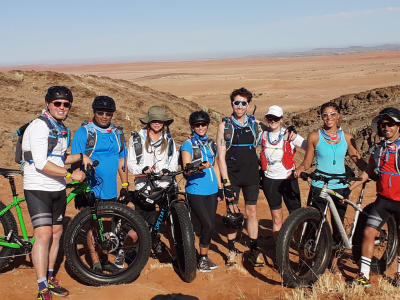 Bikes, Bandages and Buddies: the scale of the task ahead becomes a daunting reality

Monday 24 February:  The team of intrepid celebrities taking on Sport Relief: The Heat Is On, a gruelling 100-mile expedition across the Namib Desert, have set off on the first day of their challenge, which will see the team tackle some of the highest sand dunes in the world, cycling 35 miles in soaring temperatures.

Ahead of the first stretch of their four-day challenge, Frankie Bridge, Karim Zeroual, Krishnan Guru-Murthy, Louise Minchin, Nick Grimshaw, Rob Rinder and Samantha Womack endured a ‘once-in-a-decade’ thunderstorm, as described by the local support team based in Namibia, that soaked the camp and filled their tents with sand and water last night.

The shock weather caused the team, who woke at 6am (GMT+2) to temperatures already reaching 30 degrees Celsius, to set off later than planned this morning.

Today they will cycle on fat bikes for 35 miles. An update from the team reported that the group has been spread out, with Rob Rinder speeding ahead and making it first to the day’s halfway mark and Samantha and Krishnan bringing up the rear.

An hour-long documentary will chart the highs and lows (both physical and emotional) of the team as they tackle the world’s highest sand dunes for Sport Relief. It will be shown on BBC One during the week of the 9th March.

One in four people will be affected by a mental health problem in their lifetime, and each of these adventurers feels passionate about speaking up and taking on the elements to crush the stigma surrounding this issue.

Halfway through the day, Frankie Bridge said: “It was over 30 degrees when we woke up this morning. We are now part way through a 35-mile cycle and Rob is so far ahead I can’t even see him! We are camping each night and currently I’m sharing a tent with Grimmy. We were told it hardly ever rains and all then all our tents got filled with sand and water. We arrived in a full-on thunderstorm."

Nick Grimshaw said: “In preparation for the location change, I Googled Namibia and then I went on the Central Line to help prepare for the heat. It feels so other worldly that we could have been going to Mars. I didn’t even bring a waterproof as when would it ever rain in the desert? I'm proper exhausted. This is the worst I've ever felt. It is so much harder than anything I have ever experienced. I'm falling off my bike constantly but I know I just have to keep going. I've never faced a challenge like this before. I am keeping pace with Louise, she is my bike buddy and she is amazing. Rob is so fast. He's probably at Heathrow already.”

Samantha Womack said: “We arrived in a rainstorm. The guide with us had worked in Namib desert for seven years and said he had never seen a thunderstorm like it. But as soon as it passed over the heat was vicious. It's a dry heat that stings your skin. I went for a small walk away from the camp and just walking up a small hill is exhausting. The scenery is amazing, it's like being in a Star Wars film. It's all quite daunting and I feel so frustrated. I'm scared. I'm emotional and I’m disappointed in myself that I'm struggling so much. It's the insane heat. It makes it all so hard. I don’t want to be upset but I'm missing people already.”

Rob Rinder said: “I love doing marathons as it's the only time that I'm truly in the moment. But I know this will be a different kind of challenge. What's the point of being in discomfort unless you can moan about it!”

Krishnan Guru Murthy said: “I fell over 3 times in 1km and had to have my leg bandaged, I’m struggling with my breath. The trouble is now in my head. I need to push through.”

Karim Zeroual added: “Physically I'm strong but this terrain is so tough. You make such tiny progress. It's so demoralising.”

Over four days, from today to Thursday, the team will attempt to cross the Namib Desert in Namibia by foot, bike and ski (on sand) to reach the Eduard Bohlen shipwreck on the notorious Skeleton Coast. Guided by their own navigation skills they will face exhausting days in the blistering sun as they take on the highest sand dunes on earth and encounter deadly desert wildlife as they cross the world’s oldest desert - all in temperatures up to 35 degrees Celsius.

BBC Breakfast, The One Show and BBC Radio 5Live will all be will be tracking the team’s progress next week. Each day, from today to Thursday, they will follow the group’s ups and downs as they tackle this 100-mile desert challenge of a lifetime, with footage straight from Namibia and daily catch ups as the team take on this epic adventure.

Sport Relief is back on Friday 13th March. Find out how you can get involved here(opens in new window).