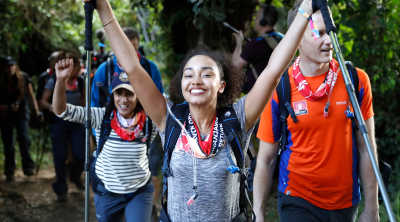 Today saw Team Kilimanjaro reach 14,000ft with tiredness, weather and a sharp rise in altitude starting to take its toll on the group.

After hiking two and half hours to Simba Camp for breakfast, they set off again on a tougher more challenging trail, moving away for the first time from the route taken by Kilimanjaro: The Big Nose Red Nose Day Climb, ten years ago.

Despite heavy rain and harsh winds swarming the team, they remain in good spirits and even found the time to celebrate Ed Balls’ Birthday with a sing along and a surprise cake.

Jade Thirlwall said: “It’s a lot more challenging. I’m not gonna lie, I thought it would be a little bit more glamorous, the camping site. It’s not going to be that full on. Then we got here, there’s nothing glamourous at all.

Leigh-Anne Pinnock said: “There have been a few tears. We’ve all had tears. We are all out of our comfort zone. I love that we are experiencing new things but it is seriously challenging. Dan Walker has been like a big brother helping us with our backpacks. He is literally the nicest bloke ever.”

Dan Walker said: “I am carrying Jade’s entire make-up collection at the moment. She’s got a massive mirror in her bag! And a medical kit.”

Dani Dyer said: “I am feeling very emotional today, I literally cried at a rainbow!  What an amazing bunch of people I am with though. We will get there!”

Shirley Ballas said: “Everybody is trying to put their best foot forward with the weather, but I’ll tell you, this is the hardest thing I’ve ever done in my life. So from an emotional standpoint and also waking up at 4am in the morning, getting up, being in the cold, no showers, so hard, but what an amazing cause”

The full story of how the group adjust to their basic camping conditions, new climbing companions, extreme temperatures and debilitating altitude sickness will be revealed on BBC One in the run up to Red Nose Day, which is on Friday 15 March.