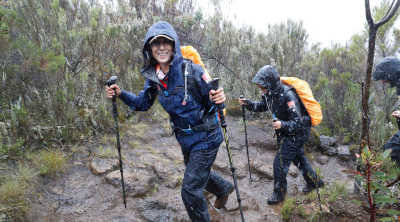 After yesterday’s birthday celebrations for Ed Balls, it was back to reality for Team Kilimanjaro today, as they trekked through the most remote part of the route yet. With the terrain becoming more challenging, the only sign of life for the climbers was the odd stray buffalo.

The team hiked through the Alpine desert to Pofu Camp where they will be hoping to acclimatise after a tough few days of altitude sickness.

Anita Rani said: “I came down really badly with altitude sickness and believe me when I say it was unlike anything I’ve experienced before. I was feeling sick, I had a headache, I thought I was losing my mind. And yesterday I honestly thought I wasn’t going to be able to carry on with the expedition, and that had me balling my eyes out like a small child, so there is a lot of emotion and it’s only day three”

Aside from the physical and mental struggles, Ed was in good birthday spirits yesterday as he stayed up late in below freezing temperatures to say hello to his wife, Yvette Cooper who was calling live from The One Show sofa. Yvette sneaked a vacuum packed version of his favourite dessert, sticky toffee pudding, in his bag, as well as birthday cards from their children who pleaded with him not to be too embarrassing.

Ed Balls said: “Thank you for my pudding! Very sad not to be with the family but fabulous to be with all the people here. They made me a cake and everybody sang Happy Birthday, so it’s ok, but I’m missing the kids. I got the birthday cards, they said please don’t be too embarrassing…I’ve already failed!”

There was even more to celebrate this afternoon as sport pundit and NFL star Osi Umenyiora’s won best BBC Sports Pundit at the Sports Journalist Awards last night for the BBC NFL show.

Despite altitude sickness and tough terrain, team morale is high and the Kilimanjaro nine are more eager than ever to reach the summit on Friday.

Dan Walker said: “It’s only because of this lot, this incredible bunch that we’re with that we’re all pulling through. I did have to give Jade, who is a wonderful human being, some bad news today. She’d mis-timed her diary and actually thought we were getting to the top of the mountain tomorrow. We’ve actually got three more days up there.”

Dani Dyer said: “It is tiring, but I know I can do it. I won’t let the altitude affect me. I’m going to try and overcome it as much as I can but all your donations mean so, so much to all of us.”

Jade Thirlwall said: “The last two hours have probably been the hardest. Last night I was really, really sick, vomiting, I felt nauseous, had a bad tummy and a high temperature, I'm not sure if it was a bug or the altitude. Been taking tablets, didn’t sleep very well. Got a blister on my toe! It’s just one thing after the other! Woke up this morning, feeling a lot better, everyone’s in good spirits, and it’s all worth it for this amazing cause.”

All the drama will be followed up close and personal, with highs, lows, twists and turns and moments of delirium captured on camera by Shine TV, who are making a one-hour special documentary of the challenge, Kilimanjaro: The Bigger Red Nose Climb. The full story of how the group adjust to their basic camping conditions, new climbing companions, extreme temperatures and debilitating altitude sickness will be revealed on BBC One in the run up to Red Nose Day, which is on Friday 15th March.