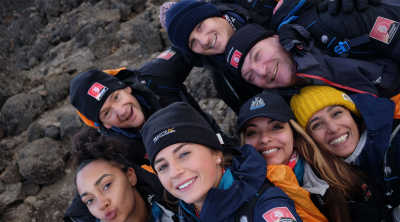 Emotions are running high in the Kilimanjaro camp for the nine climbers taking on the exhausting trek for Red Nose Day, as the extreme altitude begins to have an affect on their bodies.

Day five has seen the team hike from Pofu to Massif today with nerves kicking in as the summit comes in to view.

Professor Greg Whyte, who is climbing with the group said: ‘We’re at 4,000 metres now which is about 13,000 ft, and of course that has a profound effect on the body. It’s mentally where it really does take the pressure, and what it does, is it heightens emotions and we see that with the guys here.

"We see people breaking into tears at the slightest thing because the emotions are so affected. The top of Kilimanjaro is 6,000 metres away, it’s over a mile higher than we currently are, so what’s happened so far is just going to get worse and worse as we continue the climb.”

Team morale is becoming vital and strong friendships are being formed. Little Mix’s Jade Thirlwall serenaded Dan Walker back to health after a bout of altitude sickness, also providing him with some much-needed strawberry laces.

Jade Thirlwall said: “I helped Dan when he was really poorly - I did a bit of singing for him. His altitude sickness put him in a weird mood and he joked that I was a rubbish singer!  Ha, luckily I wasn’t too offended, I forgave him because I knew he was unwell.”

Dan Walker said: “I had really bad altitude sickness but Jade, even though I can’t quite remember it, sang Africa by Toto to me, and she gave me a strawberry lace! She saved me!”.

Shirley Ballas and Osi Umenyiora have also formed a strong friendship as the terrain has been getting tougher.

Shirley Ballas said: “From the very beginning I felt safe with Osi at the back because I slipped so many times, he saved my life - I’m not joking! It just feels good having him beside me.”

Osi Umenyiora said: “Shirley is my absolute girl! When we first had a conversation, I thought wow! I really like this young lady, we’re going to have a connection. I told her I was going to have to her back, and I have had her back ever since!”

The team has found some time for reflection as they remind themselves why they’re climbing Africa’s highest mountain for Red Nose Day.

Dan Walker said: “The reason why we’re so tired is because every night we have a chat about why we’re doing it. Shirley has made an amazing appeal film about her personal connection to male suicide and Shirley has been the most incredibly determined woman for these last five days and that is really driving her on.”

Shirley Ballas said: “It’s not easy, it’s the most difficult thing I’ve ever done in my life, but I just keep reminding myself why I’m doing it. I’m hoping everybody out there also will realise that they too can help by donating to Comic Relief because I just think it’s an amazing charity.”

The full story of how the group adjust to their basic camping conditions, new climbing companions, extreme temperatures and debilitating altitude sickness will be revealed on BBC One, Wednesday 13th March at 9pm.

To support the team, you can make a donation online at comicrelief.com/Kilimanjaro