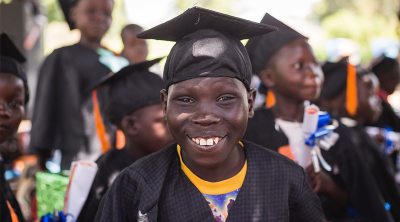 Money raised through Sport Relief is used to support people living incredibly tough lives in the UK and around the world.

At eight-years-old, Godfrey was a little older than most of his classmates when he graduated from nursery – but just a few years ago, it seemed unlikely that he would be able to access any kind of education.

Godfrey lives in rural Northern Uganda with his parents, who are farmers. When he was three years old it became clear that his speech development was delayed. He found it hard to interact with other children and became distant and isolated. His parents had nowhere to turn to for support because they could not afford to pay for a medical assessment, there was no nursery nearby, and the closest primary school was 4km away, a distance that Godfrey didn’t yet have the confidence to travel alone.

Godfrey’s parents thought he would never be able to receive an education – until a Home Learning Centre (HLC) opened in their village. The HLC, run by community volunteers, provides community-based, pre-primary care, and also gives parents the chance to sit alongside their children and receive a basic literacy education.

Godfrey’s mum, Susana, says the HLC made a huge difference to Godfrey - his speech and language developed well, he joined in with activities, like singing and dancing, and made friends too.

Susana says: “I want to give my children a chance to get an education. The HLC has helped me see that all children are equal and should go to school.”

Following his graduation from the HLC, Godfrey has now joined primary school and would like to be a doctor when he’s older. Godfrey’s education is progressing well, as he says: “I got 5 ticks in my book”.

The HLC is an initiative that’s run by a Ugandan organisation called Literacy and Adult Basic Education (LABE), funded by Comic Relief and UK aid.  LABE found that in Godfrey’s community, like many others in Northern Uganda, there was no form of nursery or pre-primary education available. This meant that children were only able to start learning when they started primary school, and for some, starting primary school with no early education, is tough. So, with the support of the community, LABE set up a centre to change this. Now, more young children are getting the support they need to start their education and more families are seeing the difference that education can make to their children’s lives.

Sport Relief brings the nation together to get active and raise life changing amounts of money through the power of sport.

In an unjust world there will always be poverty. So the money raised by Sport Relief is used to fight inequality in the UK and around the world.

Sport Relief powers local change makers, on the ground to ensure people have a safe place to be, help children to survive and thrive, reduce violence, fear and discrimination and improve mental health services and support networks.

The money raised is used to support people living incredibly tough lives, in the UK and around the world.

Sport Relief is back on Friday 13th March. Find out how you can get involved at sportrelief.com/pr-get-involved(opens in new window).