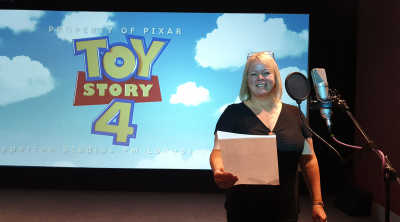 One very fortunate member of the public makes a special feature in Disney and Pixar’s Toy Story 4 after winning the opportunity to record a voice cameo through the Comic Relief Prizeathon.

Ros Beddall, a Royal Mail worker from Nottingham, had the ultimate money can’t buy experience when she secured a role in one of the most anticipated films of the year as a talking robot.

After recording her lines at Shepparton Studios, Ros was invited to join the stars on the red carpet at the European Premiere in London and meet with the films’ producers Jonas Rivera and Mark Nielsen. Ros was also lucky enough to see her name up in lights as her name appears in the credits of the film.

Ros commented: “When I won the Comic Relief Prizeathon I couldn’t believe it. All my family were offering to take the prize off me but I obviously said no thank you. On the day of the recording I felt like a VIP with taxis, trains and a hotel all arranged for me. My time in the studio wasn’t rushed at all and I was given goody bags full of Toy Story stuff. After that I received a call to say I was invited to the premiere as well - wow!  I spent 90 minutes on the red-carpet rubbing shoulders with the famous and then got to see my name in the credits! What an amazing experience.”

Ros won the role after donating £10 to enter the Comic Relief Prizeathon - an epic prize draw which took place during Red Nose Day offering money can’t buy experiences. Money raised through the public’s generous bids and prize draw entries will make a huge difference to countless lives in the UK and abroad.

Other prizes included breakfast with Sir David Attenborough, afternoon tea with the cast of The Crown, a meet and greet with Louis Tomlinson and a private concert from Mumford & Sons.

Toy Story 4 is in cinemas now.