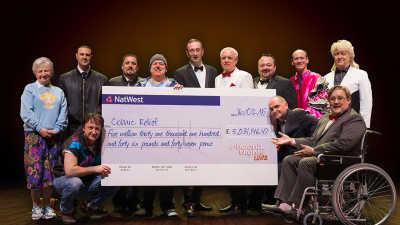 Peter Kay’s Phoenix Nights raised more than £5m for Comic Relief - the most money raised by a live comedy show anywhere in the world.

The 16 shows, which took place at Manchester Arena last month, all sold out, with 196,000 tickets being snapped up.

It was the first time in 15 years that the full original cast had got back together and everyone gave their time for free so that all profits from the shows could be donated to Comic Relief.

Phoenix Nights followed the rise and fall of scheming club impresario Brian Potter and his band of loyal staff and regulars who will do just about anything to make his beloved Phoenix club a success, despite all the odds being stacked against them.

“Comic Relief has always been close to my heart and I always try to think of something,” Peter Kay said. “I could think of no better way to raise money and have fun then getting everybody back together.”

The £5,031,146.47 will be used to help people living incredibly tough lives here in the UK and across Africa.