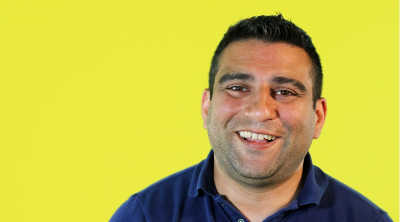 Ali hid his sexuality from his family for years; only coming out to them two years ago. Worried about the impact that revealing he was gay would have on his family’s standing within their Muslim Pakistani community, Ali even went so far as to marry a lesbian from the same culturalbackground. But, he says, he was living a lie on top of a lie and it put immense pressure on him.

“So you’re gay and you’re not telling your family and you’re keeping that to yourself. Then you’ve got this bigger lie keeping up this false marriage as well. So it’s always a difficult balancing act.”

He attended his first Pride event with the Yorkshire Terriers - the local LGBT football team which he joined in 2004. But, by 2005, he wasn’t just attending Pride, he was running it. As the social secretary for the Terriers, Ali was approached to help set up the first ever Leeds Pride by Yorkshire MESMAC and with the help of his hard work, it has grown from 300 people to 55,000 strong.

He joined Yorkshire MESMAC’s board of trustees and two months ago became a community development worker for their Total Men’s Health Project, funded by Comic Relief. Ali works to help sports clubs and facilities become more sensitive to gay, bisexual, trans men, and non-binary individuals, while also working with young GBT men to help tackle their self-esteem, depression, anxiety and body image issues and encourage them into sports and physical activities.

“Pride is important all year round, it’s about being 100% inclusive all of the time and making sure that everyone is welcome.”