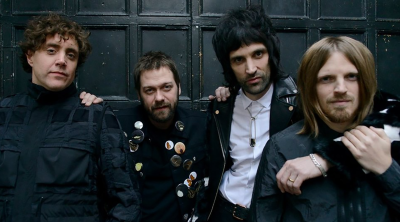 Friday 6th March: Rock legends, Kasabian, are offering fans the chance to win tickets to their Solstice II gig, their only UK show of 2020 which is already sold out, to help raise life changing money for Sport Relief.

As part of the Sport Relief Prize-a-thon, the winner and their guest will also receive a pair of backstage passes and have the chance to meet Kasabian at the Solstice II gig in the band’s hometown of Leicester, where they’ll be supported by Sam Fender, Inhaler and Easy Life.

Kasabian’s guitarist Serge Pizzorno said: “We’ve promised our fans the biggest party of 2020 and Solstice II will be exactly that. We’re so excited to offer Sport Relief two tickets to our sold-out gig with special guests Sam Fender, Inhaler and Easy Life. Sport has always been a massive part of my life as a player and a fan, so working with Sport Relief, to promote sport and raise money for those in the UK and around the world who need it most, is a genuine honour.”

This latest prize joins those revealed last week: the chance to walk among wrestling royalty with WWE, and to meet JLS at a dance rehearsal for their upcoming tour. Costing just £10 per entry, all money raised from the prize draws will help tackle issues such as domestic abuse, mental health stigma, homelessness and child poverty, both in the UK and around the world.

To enter the prize draws and be in with a chance of winning, visit prizeathon.comicrelief.com(opens in new window). Entries close on 12th April, and will cost £10 per entry, with all proceeds going to Sport Relief.

More exciting experiences to be revealed in the run up to Sport Relief, which returns on Friday 13th March.

Find out other ways you can get involved here(opens in new window).