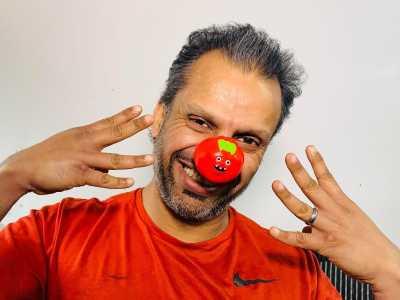 Rae Saleem, 46, is taking on an 82-mile quadrathlon for this year’s Red Nose Day, which returns on Friday 18th March. He’s pushing himself to the limit to row 10km, complete 10km on the cross trainer, cycle 90km and run a 21.2km half marathon.

The gym-based quadrathlon will be held at the leisure centre near his Hertfordshire home. He is also organising a series of exercise classes to encourage others to push themselves physically and mentally.

Rae’s endurance challenge marks a high point in his recovery after he was left paralysed from the neck down after a cycling accident in 2017. Experts warned Rae, from Potters Bar, would never walk again, but months later he regained feeling in his toes. After a gruelling rehabilitation regime, he learnt how to walk again. In a bid to build back his physical strength and his mental resilience, Rae also started exercising again.

Rae said: “I’m still not fully healed. Due to nerve damage, my right side is weaker than my left, I still get spasms and body pains. But my injury gave me a new perspective on life. I became more grateful for the things I have and just want to help and inspire others to discover their real potential. If I can do that after not being able to walk, then you can do anything.”

He added: "I will be rowing 10,000m, travelling the same distance on a cross trainer, cycling 90km and doing a half marathon on a treadmill. The four challenges represent the four different key need areas Comic Relief works to tackle - homelessness, domestic abuse, poverty and mental health problems.”

Last year, Rae also set himself a huge challenge which saw him run four miles every four hours for 48 hours – the equivalent of two marathons in two days with only around five hours of sleep. He chose to fundraise for Comic Relief as he had personal experience of two of the key areas the charity funds - poverty and mental health.

Rae said: “Comic Relief ticks so many boxes of causes which are personal to me and my family and I have an opportunity to help. You can help too by fundraising for Red Nose Day this year. For me it’s been amazing to give back to charities and help be the change after they helped me so much throughout my recovery. Small amounts, large amounts, it all adds up to make a big difference.”

Money raised by Red Nose Day will help people in the UK and around the world live free from poverty, violence and discrimination, and support people with their mental health. Donations will also help to fund organisations providing essential support for people in Ukraine affected by the terrifying conflict and the mass displacement of people in many parts of the world.

On a mission to lose weight after the scales topped 120kg, father-of-three Rae took up cycling. But he clipped a curb as he was riding down a hill near his home in Potters Bar, Hertfordshire, in 2017. He flew over the handlebars, smashing his face on the concrete pavement. The crash left him with serious facial injuries, including a broken skull, neuro damage, and a broken nose and cheekbone. It also pushed four vertebrae in his back into his spinal cord, leaving him paralysed from the neck down.

Luckily, a nurse was one of the first people on the scene and she stopped Rae from moving, despite his protests, preventing his injuries from becoming any worse. He was sent to Barnet Hospital and then transferred to the Royal London Hospital Major Trauma Unit. Experts at the Royal London told Rae his severe spinal injuries had left him paralysed from the neck down and that although he was lucky to be alive, he would never walk again. But after several weeks of recovery, Rae felt his toes move. Then slowly he began to regain feeling in each of his limbs.

Supported by experts at the London Spinal Cord Injury Centre, he learnt to walk again. His recovery was nothing short of miraculous, but he had many more challenges to face before he was back on his feet. Rae had been working as a freelance IT consultant and so could not work while he recovered. It left his family on the brink of poverty. They were facing eviction from their home when they struggled to pay the rent and forced to use foodbanks when money was scarce. It left Rae struggling with his mental health and he suffered from depression.

But in a bid to build back his physical strength and his mental resilience, Rae started exercising again. He now takes on physical endurance challenges to raise money for the charities that helped him, including disability sports charity WheelPower and Back Up, an organisation that helps people get back into work following a spinal cord injury. He also chose to fundraise for Comic Relief as he has personal experience of two of the four key areas the charity funds; poverty and mental health. Last year, in aid of Red Nose Day, he set himself a huge challenge which saw him run four miles every four hours for 48 hours – the equivalent of two marathons in two days with only around five hours of sleep.

This year Rae, now a Senior Project Manager for Boston Scientific, has planned another fundraising challenge to raise money for Red Nose Day, Comic Relief’s annual fundraising campaign. He will be taking on an 82-mile quadrathlon in his local gym, where much of his rehabilitation took place, and also organising a series of exercise classes to encourage his local community to get involved.

Friday 11th March – Taster classes - From 6 to 8pm Rae will be hosting a number of classes with help from expert instructors - These include Les Mills BodyCombat, Les Mills BodyPump, Les Mills BodyBalance and Stages (Cycling) - Each class will last 30 mins each and will cost £2 per entry. First come first served as limited studio space

Saturday 12th March - Quad Gym Extreme Challenge - From 2 to 6pm a series of hour-long classes will run at the gym, £4 per session, with all class proceeds going to Comic Relief - These include Stages (Cycling), Les Mills BodyCombat, Les Mills BodyPump, and Les Mills BodyBalance.

Sunday 13th March – Rae's Quadrathlon - Go along and support Rae at the InspireAll leisure centre in Furzefield from 9am - He will be rowing 10km, complete 10km on the cross trainer, cycle 90km and run a 21.2km half marathon on a treadmill - A second bike will be provided to encourage people to join in Rae’s challenge alongside him

What we’ve learned about using Sport for Change to empower young women and girls: Insights from our Levelling the Field 1.0 programme in Malawi, Rwanda and Zambia.

Learning about learning in sports for change programmes (and beyond)