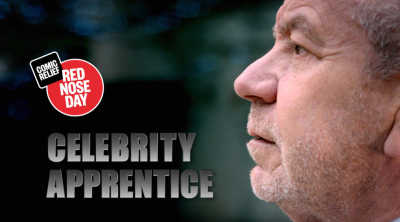 The toughest business show on TV is back for Red Nose Day 2019, and Lord Sugar will be putting ten celebrities through their paces to raise money.

Celebrity Apprentice for Comic Relief will air ahead of Red Nose Day as a two-part special on BBC One and live and on-demand on BBC iPlayer.

Ten ambitious celebrity candidates will take on a tough challenge set by The Apprentice supremo as they battle it out in two rival teams to raise as much money as possible for Comic Relief’s Red Nose Day.

As always, both teams will be closely observed by Lord Sugar’s advisors Baroness Brady and Claude Littner, who will report back on their final results in the boardroom.

The task: plan an incredible, all-singing, all-dancing cabaret night. And not just that - sell all the tickets and make sure the guests have a fantastic time on the night.

The team who raises the most money for charity crowned the winner.

Lord Sugar kicks off the task by summoning the candidates to the boardroom.

He says: “We are all here for one reason, to raise money for Comic Relief.  Entertainment is big business, all you people should know that, so with that in mind your task is going to be to organise and host a cabaret night.”

With Lord Sugar expecting them to pull out all the stops, some of the candidates rope in their famous friends in an effort to get the upper-hand and make their event extra-special.

Comedian Russell Kane says: “Watching us try and work together will probably be pant-wettingly funny and I’m sure I’ll cringe watching it back, but it’s going to be a unique experience and all in the name of an amazing cause.”