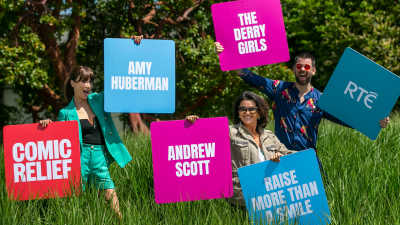 RTÉ in association with Comic Relief are bringing the cream of Irish comedy and entertainment together to raise a laugh, as well as, much needed funds for the Irish charity sector on Friday 26th June.

The marathon show, which has been extended due to the phenomenal line-up of stars from comedy, entertainment and sport, will be broadcast live from RTÉ studios from 8pm and promises to be an unmissable night’s entertainment packed full of showbiz reunions and comedy sketches with unexpected celebrity collaborations, live studio performances, lip-syncs, dance and sport challenges and much more.

Richard Curtis, Founder, Comic Relief: “I’m delighted to see so much amazing Irish talent come together to raise funds at this hugely difficult time for so many incredibly important Irish charities. It’s fantastic to see RTÉ collaborating with the wonderful people at Community Foundation Ireland via Deirdre O’Kane and her many mates who’ve become firm friends of all of us at Comic Relief, here’s hoping the night is the massive success it deserves to be!”.

RTÉ and Comic Relief’s charity partner for the event is The Community Foundation For Ireland who will distribute the funds raised. One of Ireland’s leading philanthropic organisations with extensive expertise in grant making in Ireland, the Community Foundation for Ireland was established in 2000 and has a strong working relationship with over 4,000 non-profit organisations at a national, regional and local level throughout Ireland.

Tina Roche, Chief Executive, The Community Foundation for Ireland Said, “The Community Foundation for Ireland is delighted to be partnering with RTE and Comic Relief. The community and voluntary sector has seen a substantial drop in fundraising and requires much needed funds to help people and our communities to support social issues such as mental health, homelessness and rising inequality and poverty. RTÉ Does Comic Relief is providing a platform for everyone to be a philanthropist and play our part in rebuilding our society, ensuring no one is left behind.”

About Comic Relief’s activities in Ireland

Comic Relief's activities in Ireland have been spearheaded by comedian Deirdre O’Kane, TV producer Darren Smith, Talent Agent Jane Russell, Advertising Exec Patrick Hickey, Accountant Ciaran Medler and Lawyer David Phelan. This group will be working in conjunction with RTÉ, Comic Relief UK and CFI across all aspects of the campaign, the founders of this group have previously staged three gala nights of stand up comedy at The 3 Arena on St. Patrick’s Night, these concerts have seen close to €600k being distributed by CFI to a variety of Irish charities such as Focus Ireland, The Simon Community and Trocaire.