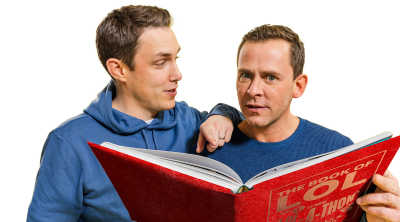 Armed with a supersized joke book, the Book of LOL, Radio 1 have started a hilarious six-day journey around the UK to collect jokes for LOL-a-thon 2019, which starts at 1pm on Wednesday, 6 March.

Lasting a whopping 24 hours, this year's LOL-a-thon promises to be bigger, better and LOL-er than ever before, as Scott Mills and Chris Stark take the helm for 24-hours.

Presenter Jordan North kicked off the tour this morning from Nob End in Greater Manchester, and the Radio 1 team will spend the next six days travelling around the UK to find the silliest named places and most hilarious people around.

As well as creating comical radio, the station is calling on their listeners to get to The Book of LOL and help fill it up with jokes in time for Scott and Chris to read out during the 24-hour LOL-a-thon.

The Book will make its way back to the London studio in time for the challenge to kick off at 1pm Wednesday 6 March.

Scott Mills said “We’re so excited to be bringing back the 24-hour LOL-a-thon for Red Nose Day! The last LOL-a-thon was nothing short of hilarious and raised a load of money for Comic Relief!

“An absolute highlight was Chris Stark taking a real horse into a bar. We want this year’s LOL-a-thon to be even more random and hilarious than before, so we’re counting on our amazing listeners to be even more LOL. After all, we have a whole Book of LOL to fill. It’s going to be an epic 24 hours!”

“Here we go again!” added Chris Stark. “We had such a laugh last LOL-a-thon and most importantly, all together, we raised loads of money for Red Nose Day. It was knackering, but it was SO much fun.”

Scott and Chris are taking on this very silly challenge to raise cash for some of the very serious things Comic Relief helps to fund.

They’ve seen first-hand the difference your money can make to young people. This includes The Good Lads Project which works in schools to help teenage boys explore issues of gender equality, masculinity and identity.

To help raise further funds for great projects like this, Scott and Chris will be encouraging their listeners to keep them going and raise much needed cash this Red Nose Day by donating £5.

Find out more and donate