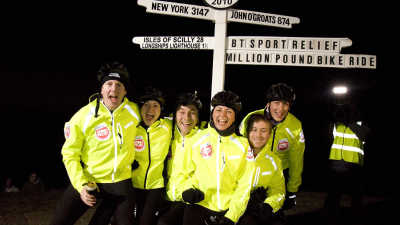 The exhausted team jubilantly reached the finish line at 18.50 today having raised an incredible £1,006,509 for Sport Relief so far. But the cyclists urge the public to keep giving to help them raise even more money and absolutely smash their target.

On crossing the finish line, David said:"It has been an amazing challenge, so much harder and more gruelling than any of us thought it would be. To have raised a million pounds in four days is a fantastic thing - thanks so much for everyone who sponsored us, it kept us going."

During the 4 day non-stop relay cycle ride, the usually pampered celebs battled brutal conditions, including blizzards, snow capped mountains and temperatures as low as -15°C. Cycling for nearly 82 hours in total, the team suffered dramatic falls, cuts, bruises and excruciating saddle sores as they strived to reach their target of £1 million.

Setting off on Monday, Day 1 saw a tough start to the challenge as the team attempted to cycle the equivalent of Mount Everest in the first 24 hours alone, with comedian Miranda the first to sustain an injury from a tumble, cutting her leg, and later receiving acupuncture treatment for severe sickness and exhaustion.

Their trainer, former Olympian Professor Greg Whyte, described the first night's conditions: "Riding in that kind of temperature at night poses serious risks - it's potentially deadly. No one would have batted an eyelid if they'd have said, let's call this off. But they didn't and I'm amazed at how absolutely no one wants to let the team down."

Day 2 saw some of the toughest terrain of the trip. Sport Relief legend David Walliams took a severe tumble as he struggled to gain speed and momentum while tackling the notorious Kirkstone Pass – a 1000ft climb through the heart of the Lake District.

Throughout Day 3 the team had to dig deep in a bid to keep going. With strained muscles and bruised limbs the celebrities went out one by one and put in some painful, but impressive performances. Despite nearing the end, Fearne Cotton said:

"We know that we need to try and keep something in reserve for the hills in Cornwall but to be honest I'm just running on empty now anyway so we will just have to see how it goes."

Over the last 24 hours, the cyclists have been struggling against the cruel weather conditions, towering mountains and extreme fatigue, but they powered through for the triumphant arrival in Land’s End.

The current total includes money from BT’s ‘Chat for Change’ Day (£250,000), Dragons’ Den star Peter Jones who raised £100,000, ever supportive BBC Radio 1 listeners (who collectively donated over £330,000) and other donations from the generous British public.

The team's heroic efforts will help vulnerable people living incredibly tough lives here in the UK and in some of the world's poorest countries.