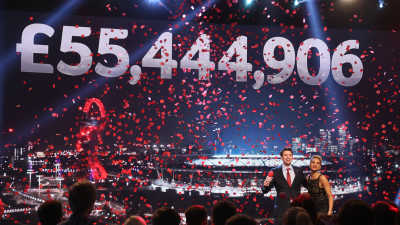 The Sport Relief Weekend kicked off on Friday with a fantastic night of sporting fun and sketches galore, as this year’s Sport Relief Night of TV (BBC One and BBC Two) entertained the nation while raising an incredible £55,444,906 so far. The money will help make a real difference to people living incredibly tough lives here at home in the UK and across some of the world’s poorest communities, with more still coming in from fundraisers taking part in the Sainsbury’s Sport Relief Games this Sunday.

Included in the overall total and the largest corporate contribution on the night was £7,060,681 raised by Sainsbury’s colleagues and customers who have been doing themselves proud across the country by carrying out fundraising events. Sainsbury’s also raised money by selling the range of must-have merchandise, which includes the official Sport Relief t-shirt, available to buy in store and online until 22nd March.

Hosting the TV spectacular on the BBC were John Bishop, Alesha Dixon, Greg James, Gary Lineker, Davina McCall, David Walliams and Claudia Winkleman. The return of the Clash of the Titans was hosted by Dan Walker and Ore Oduba and Sir Steve Redgrave and Andrew ‘Freddie’ Flintoff were the captains of the two teams, with Team Flintoff winning an epic battle.

The overall total also includes money raised by this year’s BT Sport Relief Challenges. Jo Brand’s Hell of a Walk saw the comedienne take on an incredible 135.7 miles as she walked from east to west, across the width of the country. The toughest challenge of Jo’s life raised an incredible £1,159,220 with £360,331 of that pledged by BT.

The One Show’s Alex Jones, TV presenter Angellica Bell, comedian Hal Cruttenden, actress Doon Mackichan, and TV presenters Ore Oduba and Suzi Perry all took part in the BT Sport Relief Challenge: Hell on High Seas which saw the team battle fearsome winds, freezing temperatures and rough seas, in a feat of pure physical, mental and emotional endurance. The mammoth challenge raised a fantastic £1,062,868 with £160,000 of that pledged by BT.

BT also handled more than 104,000 calls to the donation line during the live TV show, peaking at 88 calls per second with BT over 6,000 volunteers at 79 call centres across the UK.

Through its ‘Flying Start’ partnership, British Airways has raised £2,509,528 this Sport Relief from money donated by customers on board, as well as from staff competing in fundraising events.

Reflecting the UK public’s generous support for Sport Relief, the UK government Department for International Development has matched £10million of the 50% of public donations that will be spent internationally to help young people overcome the obstacles they face. HM Treasury has also donated £3 million to the campaign as part of a funding partnership with Comic Relief to transform the lives of women and girls in the UK.

The Premier League continued their fantastic backing for Sport Relief by contributing an astonishing £1,050,638 for the campaign. This included their support of BBC 5 Live’s Battle of the Five-A-Sides with footballing legends Alan Shearer and Robbie Savage taking on a challenge for Sport Relief once again. This time round the pair held Sport Relief’s biggest ever five-a-side football match, which saw over 1,100 players take part in over 57 hours of continuous football. The stars were also joined by Danny Jones, Rachel Riley and Josh Cuthbert, who all played 12 hours straight of continuous football. Alan Shearer came out on top when the final whistle blew.

As part of its ongoing support for Sport Relief, the Premier League turned every £1 raised by the public during the event into £5, with a final total of £1,050,638 to Sport Relief.

Some of the issues highlighted in the programme included Ebola, maternal mental health, HIV, malaria, and dementia. Money raised through donations to Sport Relief will go towards supporting these, and many other issues, to help make a real difference.

And this is just the beginning... Sunday 20th March will see the Sainsbury’s Sport Relief Games take place around the country including flagship events in London (at Queen Elizabeth Olympic Park), Belfast, Cardiff, Glasgow, Norwich and Sheffield. There are also hundreds of local events taking place across the nation.

Sport Relief would like to thank everyone who donated or gave their time and made themselves proud – we could not have done it without you.