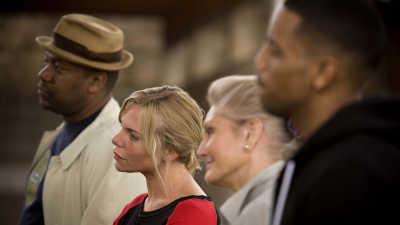 A set of four stars – Lenny Henry, Angela Rippon, Samantha Womack and Reggie Yates – recently left behind all of their home comforts to experience life in one of the world’s most impoverished and unsanitary places – the Kibera slum on the outskirts of Nairobi, Kenya.

For three days and nights, the Comic Relief supporters were left to fend for themselves in the makeshift town where one million people struggle to eke out an existence in horrific and unbearably cramped conditions.

The celebrities shared tiny shacks with local residents (and cockroaches), attempted to find work and witnessed firsthand just how painstakingly hard life in Africa’s biggest slum can be. Open sewers run through the street, cholera and typhoid are rife and 20% of children die before they are five. Understandably, crime is widespread and many women and girls are forced to turn to prostitution just to survive.

As one of Comic Relief’s most long-standing supporters, Lenny Henry has been on countless visits to places in dire need of help - but even he was shocked by what he saw and said: “Living in Kibera was unlike anything I’ve ever seen or experienced before. It was without a doubt the hardest thing I’ve ever had to do and has completely changed my life. It was an incredible journey, and I’ll never forget it.”

The celebrities’ emotional and physical journey has been captured on film for a two-part documentary – Famous, Rich And In The Slums – that will be aired on 3rd and 10th March at 9pm on BBC One.

The famous foursome are hoping that their efforts will help to raise money for Comic Relief to support people like those featured in the documentary.