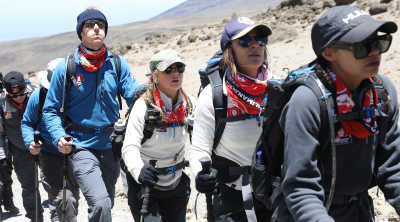 It’s day six and the summit is now in full sight for the nine Red Nose Day climbers, as they gear up for their toughest hours yet scaling to the top of Mount Kilimanjaro tonight.

So far today, the team have climbed 2,296 feet and will settle in to camp for a few hours sleep later this evening before waking up just before midnight for kit checks, team talks, and safety briefings. The task ahead will leave the climbers trekking through the night for eight hours straight in freezing temperatures and the biggest rise in altitude they will have experienced so far. The next 24 hours will seriously put the climbers’ physical and mental strength to the test.

Alexander Armstrong who has raised concerns about the increase of altitude, said: “We have been warned by Professor Greg Whyte, who is climbing with us, that the next 24 hours is going to test everything we have.

Over the next 24 hours we are not going to have any breath to actually speak to each other so we are just going to closely walk to together as one. Each step we take could help to save a life – that’s what is going to get us to the top of the mountain. Anyone that’s got a phone in their pocket take it out and donate, it can save a child’s life.”

Dani Dyer said: “If I had it my own way, I would just try and climb the mountain now. If my body could handle it, I’d climb the mountain and just go home! The camping is the hardest thing for me. I’m a clean freak and I haven’t washed now in days! Six days I haven’t washed. I’m worried about my armpits. I’m worried about them. I wouldn’t trust anyone to go near me. The climbing, the walking, I can handle it. It’s just the camping. Never again. Never ever again. Never, never, never ever, in capital letters, again. Exclamation mark, never!”

Jade Thirlwall said: “It’s definitely been a tough one. We are not going to give up. We are getting to the top of Kilimanjaro and we are going to raise as much money as we can for Comic Relief so make sure you keep donating.”

Osi Umenyiora shares his motivation for pushing on – and that is thinking about donations that can help Comic Relief fund projects that support malaria, due to his personal connection to the issue.

Osi Umenyiora said: “We’ve just arrived here at base camp. It’s tough, very, very tough. We’ve got a whole lot more to go, so we’re really going to have to dig deep to find exactly what it is that’s going to get us up that mountain. Because it’s going to probably be the most difficult thing we’ve ever done in our lives.

I know exactly what I’m doing it for. I’ve had malaria before and I know people who are still dying from that disease and the fact that we’re going to raise money that is actually going to save lives is keeping us going.”

The full story of how the group adjust to their basic camping conditions, new climbing companions, extreme temperatures and debilitating altitude sickness will be revealed on BBC One, Wednesday 13th March at 9pm.

To support the team, you can make a donation online at comicrelief.com/Kilimanjaro