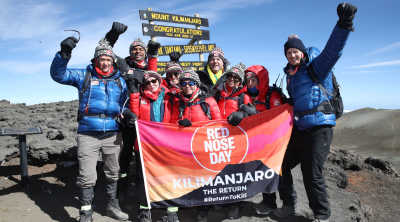 The heroic team have climbed the equivalent of nearly four Ben Nevis’ and 18 Eifel towers over the last few days, all to raise life-changing funds for Red Nose Day. The Kilimanjaro nine, a term coined by Dan Walker earlier in the week, all reached the highest point in all of Africa at around 5:30 this morning.Anita Rani, who was one of the first to fall victim to altitude sickness is very happy to have reached the top.Anita Rani said: “Ladies and gentleman, boys and girls, welcome to the top of Mount Kilimanjaro. We have reached the summit! This is the rooftop of Africa – it feels so good! We are so tired and we are told it was nigh on impossible that all nine of us would do it together, but you know what…we did. We are very, very happy and thank you for all your support.”

This week has seen the courageous climbers hike their way through the inevitable highs and lows of taking on such a difficult mission. From celebrating Ed Balls’ birthday at 14,000 feet, to Jade’s never ending tuck shop, to Osi and Shirley’s now lifelong friendship – the team have come together to complete the hardest thing they’ve ever had to do in their entire lives, whilst at the same time raised hundreds of thousands of pounds to help change lives.

All the drama will be followed up close and personal, with highs, lows, twists and turns and moments of delirium captured on camera by Shine TV, who are making a one-hour special documentary of the challenge, Kilimanjaro: The Bigger Red Nose Climb. The full story of how the group adjust to their basic camping conditions, new climbing companions, extreme temperatures and debilitating altitude sickness will be revealed on BBC One, Wednesday 13**th** March at 9pm.

To support the team, you can make a donation online at comicrelief.com/Kilimanjaro(opens in new window)