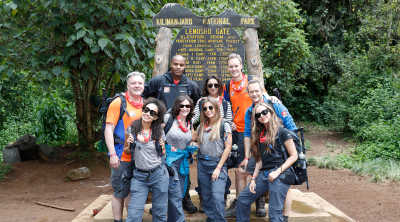 After weeks of anticipation, training and breaking in their hiking boots, nine famous faces have today begun the biggest physical challenge of their entire lives – the climb is on and there’s no looking back as Team Kilimanjaro are on their way to raising lots of life-changing cash for Red Nose Day.

As he set off this morning Ed Balls said: “I can’t wait for this, I’ve been unpacking and packing, checking my kit, having briefings. Now I just want to get up that mountain! It’s a big day. Going to put one foot in front of the other and we’ll get there, the return to Kili is on!”

Arriving at Kilimanjaro national park with mixed emotions of nerves and excitement, day one has seen the team eased in to mountain life, with a steady climb reaching an altitude of 9,383ft. Tonight the team will learn how to put up their tents and decide who they will be bunking up with before the trek gets tougher tomorrow.

Jade Thirlwall said: “It’s so amazing to finally be here. It’s been quite gentle so far, but I know it's going to get seriously tough, I am not sure I am totally ready, but it’s an incredible cause and I am determined to reach the top with this amazing bunch of people. I’ve got my teabags, so I’ll know I’ll be ok!”

Anita Rani said: “I don’t mind telling you I’m feeling nervous today. Excited of course. But nervous as it’s 8 days of the unknown and were just going have to go for it, including going to the toilet in the side of a mountain. But I’m prepared to do that if you give generously to Comic Relief this year. We need your support.”

Alexander Armstrong said: “What I’ve realised today is I really do have a fear of heights! That might prove to be a slight obstacle. My classical baritone training is definitely coming into play - I’m talking about the breathing rather than a Schubert recital in camp tonight. Although now I mention it...”

Shirley Ballas said: “The nerves are very real now, it is like nothing I have ever experienced up here and it’s truly wonderful to be doing it for Comic Relief. I can tell already that I’m going to mother hen on this mountain, I’ll be the person that if somebody’s short of a wet wipe, or if somebody needs a little bit of help, I will be going over and checking on people.”

The full story of how the group adjust to their basic camping conditions, new climbing companions, extreme temperatures and debilitating altitude sickness will be revealed on BBC One in the run up to Red Nose Day, which is on Friday 15 March.