At least 8,000 children are set to take an active role in fundraising for Red Nose Day this year by participating in a nationwide virtual PE class. The ‘Big Red Class’ will be hosted by fitness instructor from a studio in Scotland, and will screened into classrooms across the UK via Zoom and Microsoft Teams. Every child that takes part in the event on Monday 14th March at 11am is being asked to donate £1 to Red Nose Day. The virtual exercise class is being organised for the second year running by fitness management company 3d leisure, who raised a staggering £10,000 through the ‘Big Red Class’ in 2021. 3d leisure’s Digital Marketing Manager believes it is a great way to get kids active – and all for a good cause.

Andy Rudkin said: “We’re extremely proud to be supporting Comic Relief again this year. It’s more important than ever to get kids active as during the pandemic, children missed out on their PE lessons and a lot of kids were more sedentary than before. But there are huge benefits to exercise and the physical and health of our children is massively important, so we’re trying to do our own little bit to help that. This is a great way of getting the kids active while raising money for a good cause.”

It is the latest in a series of fundraising challenges organised by 3d leisure in aid of Comic Relief. In 2018, people at their gyms across the nation clocked up enough miles to circumnavigate the globe by working out in the pool, on the treadmill, the rowing machine and all sorts of other equipment. In 2019 they hosted a similar project which saw participants cross the distance from pole to pole.

After their annual fundraiser was cancelled in 2020 due to the Covid pandemic, they decided to kick start it again in 2021 by hosting the ‘Big Red Class’, which saw over 4,000 children taking part in a 20minute virtual PE lesson at the same time. Instructor Debbie Jones led the event which included 96 classes taking part and getting active from the safety of their classrooms.

The gym management company also ran a 22-class virtual live ‘class-a-thon', which included a ballet class and a magic show. All the classes were themed red and 3d leisure instructors across the company dressed up for the occasion. The event raised more than £10,000 for Comic Relief.

This year, 3d leisure have relaunched their epic fundraiser and they want it to be bigger and better than ever. Andy added: “By doing it virtually we can screen it across the country, which is brilliant. And every year we try and surpass what we achieved the year before because that is what we stand for as an organisation.”

Money raised by Red Nose Day will help people in the UK and around the world live free from poverty, violence and discrimination, and support people with their mental health. Donations will also help to fund organisations providing essential support for people in Ukraine affected by the terrifying conflict and the mass displacement of people in many parts of the world. Samir Patel, Chief Executive of Comic Relief, says: “What’s so special about Red Nose Day is that it brings people from all over the UK together to make a big difference. We are so thankful for the incredible support from our fundraisers because whatever you do, big or small, helps people live free from poverty, violence and discrimination. “This includes funding organisations that are supporting people right now in Ukraine, and on the borders. So whether you buy a Red Nose, bake cakes, smash a challenge or simply pick up the phone to donate, you have the power to change lives across the world and in the UK.” 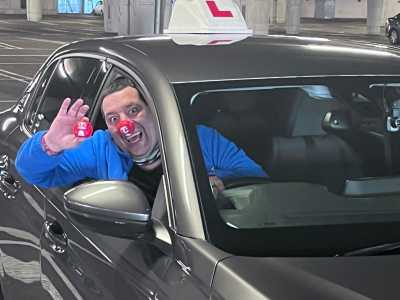