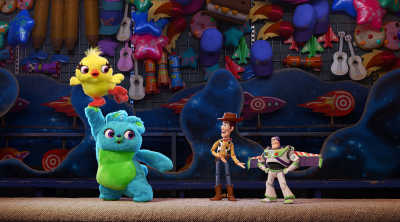 BBC Radio 2, in collaboration with Pixar Animation Studios, is offering one lucky fan the chance to win a voice cameo role in the upcoming release of Toy Story 4, which will be in theatres summer 2019. The cameo opportunity is tied to a fundraiser for Red Nose Day, the day of charity which this year falls on Friday 15th March.

The exciting prize draw launched today will allow a once in a lifetime opportunity for Toy Story fans to win a voice cameo role in the UK theatrical release of the highly anticipated film.

The prize will include travel to London and accommodation for the winner to record their voiceover, ahead of Toy Story 4 releasing in cinemas nationwide on 21st June 2019.

To find out how to enter the Radio 2 Toy Story Prize Draw and give a one-off voluntary donation of £10 to Comic Relief, visit: bbc.co.uk/radio2(opens in new window). Entries close at 6pm on Friday 15th March.

Money raised through generous donations will go to Red Nose Day, which is back on Friday 15th March. All the money raised this Red Nose Day will help vulnerable children and young people in the UK and some of the world’s poorest communities.